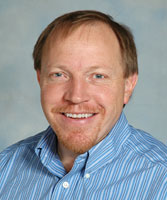 Non-steroidal anti-inflammatory drugs (NSAIDs) are among the most widely used drugs in the world for the amelioration of pain and inflammation from a variety of conditions. In the United States alone, more than 70 million prescriptions are written with 30 billion non-prescription tablets sold per year. Unfortunately, NSAIDs use is associated with a wide range of toxic side effects, particularly in the gastrointestinal (GI) tract. Because this toxicity is seen in almost every species in which NSAIDs are prescribed, it is imperative that the mechanisms associated with NSAID induced GI toxicity be identified.

Dr. Lillich is a board certified equine surgeon who studies the effect NSAIDs on wound healing, using the gastro-intestinal mucosa as the model system. Using rat cell lines and microarray technology to identify the drug treatment effect on the genomic proteomic output, novel hypotheses have been generated to test how NSAIDs effect the signal pathways related to cell migration. To this end, the Lillich laboratory has contributed several findings that point to drugs targets independent of COX inhibition, which include the family of calpain proteases and certain growth factors. These targets are being tested in vivo and preliminary findings have been confirmed. In addition, the Lillich laboratory also has collected transcriptome data of the GI mucosa that was harvested from individual treated with clinically relevant dosages of NSAIDs in horses. These data has provided the insight into clinical cases of NSAID toxicity. These data are being used to drive research to fulfill the long term goals of this laboratory which is to improve the safety of NSAIDs and to benefit all patients and species that rely on this medications to control their pain and inflammation, and improve their quality of life.