Center of Excellence for Vector-Borne Diseases

The Center of Excellence for Vector-Borne Diseases (CEVBD) at Kansas State University is an interdisciplinary research center focused on vectors (mosquitoes and ticks) and vector-borne diseases of significant importance to animal and human health.  The goals of the center are to prepare K-State well for building a strong program on vector-borne diseases and also to develop research programs which facilitate collaborations with soon-to-be established the National Bio and Agro-defense Facility (NBAF) by utilizing the facilities exist at K-State, including the Bio-security Research Institute (BRI).

The research goals of the center include developing investigator-initiated and multi-investigator projects focused on various vector-borne diseases of importance to human and animal health, including foreign animal diseases, with emphasis on pathogenesis, diagnosis, surveillance, vaccine development, and therapeutics.  The center approach will be used to promote strong collaborations among K-State faculty having shared interests.  Other goals of the center include establishing a tick rearing facility, developing a network to build collaborative research involving scientists from K-State with other academic institutions from the USA and abroad, training new generation of scientists with expertise on vector-borne diseases, developing and offering continuing education workshops, and developing additional resources such as a repository to maintain culture stocks of vector-borne pathogens. 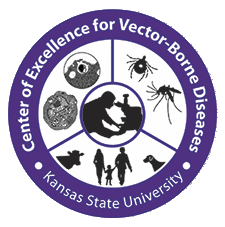