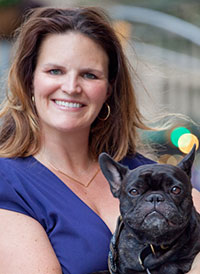 Dr. Taylor Truitt, New York, New York, is the 2016 recipient of the Outstanding Young Alumnus Award for her notable achievements since graduating from Kansas State University. The award will be presented by the K-State College of Veterinary Medicine and the K-State Alumni Association during the 78th Annual Conference for Veterinarians on June 5.

Dr. Taylor Truitt, was born in Milwaukee, Wisconsin, and grew up in Prairie Village, Kansas. She earned a bachelor’s degree in biology at Evergreen State College in Olympia, Washington, in 2001. She then earned her Doctor of Veterinary Medicine degree at Kansas State University in 2006 and became a Certified Veterinary Acupuncturist from the Chi Institute, Reddick, Florida, in 2008. In 2014, she earned her MBA from the University of California, Berkeley Haas School of Business. She is the founder and creator of a “concierge model” for veterinary medicine at The Vet Set in New York. Dr. Truitt is also working on The Vet Set merging mobile technologies with the delivery of veterinary medicine in the home in office with a hospital opening late this summer. This will service Manhattan and Brooklyn, New York.

“I’m honored to be placed in the same revere as the previous recipients of this award as they have notable careers to live up to!” Dr. Truitt said. “Just like my colleagues I’ve dedicated my life to the veterinary profession, and it means a lot to have my work recognized. Every day I feel grateful to walk into someone’s home or an exam room and be given the duty to educate an owner about the status of their pet’s health. While awards are great to receive, it’s even more amazing to help an owner improve their pet’s life. I enjoy being part of an industry and helping it to grow, change, and modernize to improve veterinary accessibility and public education of our chosen field. I look forward to the future, and I hope to help young veterinarians become successful practice owners as they dedicate themselves to the passion we all subscribe to.”

“We are proud to recognize Dr. Truitt for her ambition and entrepreneurial spirit as a veterinarian and young owner of her own practice,” said Dr. Tammy Beckham, dean of the College of Veterinary Medicine. “In every experience, Dr. Truitt has enhanced the veterinary profession in a forward-thinking manner. We hope her example inspires others in their academic and professional endeavors as future practitioners.”

After graduating from Kansas State University, Dr. Truitt was a small animal emergency intern from June 2006 to June 2007 at Advanced Veterinary Care Center in Lawndale, California. She then became associate veterinarian at P.V. Village Pet Hospital in Redondo Beach, Californian until July 2008. She was a home and relief veterinarian through January 2009 at the Wholesome Pet in Redondo Beach, California. Dr. Truitt then became the owner of the Camino Alto Veterinary Hospital and Wellness Center in Mill Valley, California from February 2009 until May 2014.

In her spare time, Dr. Truitt is an avid skier and scuba diver. She has said she is “owned” by a French Bulldog named Noah, and loves taking care of all the brachycephalic or “smoosh faced” breeds. She has two cats she described as “very demanding”: Linus and Pia.