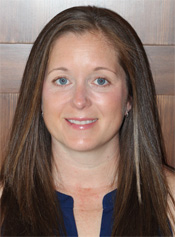 Dr. Sara Beth (Emanuel) Mullaney, Fort Collins, Colorado, is the 2015 recipient of the Outstanding Young Alumnus Award for her notable achievements since graduating from Kansas State University. The award will be presented by the K-State College of Veterinary Medicine and the K-State Alumni Association during the 77th Annual Conference for Veterinarians on June 7.

Looking for a change of pace in 2008, Dr. Mullaney joined the United States Army Veterinary Corps. Her first duty assignment was in Charleston, South Carolina, as the officer in charge of the veterinary treatment facility at Charleston Air Force Base, and the Naval Weapons Station food inspection service. During this assignment, Dr. Mullaney had the opportunity to participate in a special mission with the Navy in Liberia, Africa. She spent 30 days training laboratory technicians, working with para-veterinarians and running rabies vaccination clinics in villages throughout Liberia. She is now in the United States working on a Ph.D. in epidemiology at Colorado State University as part of the Army’s Long Term Health Education Training Program, which she expects to complete in 2016.

“It is an honor and a privilege to be named the Outstanding Young Alumnus by the Kansas State University College of Veterinary Medicine,” Dr. Mullaney said. “The support I have received from faculty members and Dean Richardson over the last 10 years has been truly amazing. I look forward to continuing my career in the U.S. Army Veterinary Corps and making an impact in the Veterinary Community worldwide.”

“We are very excited to recognize Dr. Mullaney for her career accomplishments so far, particularly in how she is serving our country as well our profession,” said Dr. Ralph C. Richardson, dean of the College of Veterinary Medicine. “She has had a wealth of global experiences and has really committed herself to expanding her knowledge and expertise in epidemiology. She sets a fine example for future veterinarians.”

In 2010, Dr. Mullaney was assigned to South Korea, where she spent a year as the officer in charge of the Camp Red Cloud veterinary treatment facility and two years as the executive officer for the 106th Medical Detachment. During this time, she traveled on another special mission to Bangkok, Thailand, where she assisted with postflood relief efforts.

While in the Army Veterinary Corps, Dr. Mullaney has completed the Army Medical Department’s Officer Basic Leadership Course in 2004, the Captain’s Career Course in 2011 and the Army Command and General Staff College in 2014. She is a member of the American Veterinary Medical Association and the National Association of State Public Health Veterinarians.

Dr. Mullaney and her spouse, Ciaron, were married in 2008.