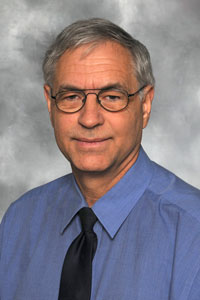 Dr. Deryl Troyer, Manhattan, Kansas, is the 2012 recipient of the 2012 E.R. Frank Award. This award is presented as part of the 74th Annual Conference for Veterinarians held June 3.

Dr. Troyer earned his bachelor’s degree in 1970, DVM in 1972 and his Ph.D. in 1985 in physiology and pathology, all from K-State. After graduating, he worked for a year as a staff veterinarian at the Arlington Heights Animal Hospital in Arlington Heights, Ill. In 1973, Dr. Troyer joined the staff as a partner at the Pawnee City Animal Hospital in Pawnee City, Neb. After working in Pawnee City for seven years, he came to the K-State College of Veterinary Medicine as an instructor in anatomy and physiology. In 1985, Dr. Troyer moved to Urbana, Ill., to work as an associate professor at the University of Illinois College of Veterinary Medicine. He returned to K-State the following year and still works there today as a professor. In 1988, Dr. Troyer was a visiting researcher in molecular genetics at Dr. Ray White’s lab at the Howard Hughes Medical Institute in Salt Lake City.

“I am deeply honored to receive this award,” said Dr. Troyer. “Dr. Frank’s work was often beyond the cutting edge of technology at that time, and I can appreciate how difficult that must have been since my laboratory frequently finds itself in that position as we investigate new ways to treat cancer.”

“We are so thrilled to be able to recognize Dr. Troyer with this award,” said Dr. Ralph Richardson, dean of the College of Veterinary Medicine. “He is one of those rare individuals who thrives as both a highly successful researcher and as an educator who is able to share his passion, enthusiasm and knowledge with his students, who have consistently ranked him as one of their most inspiring teachers.”

Dr. Troyer is married to Joyce Arlene (Larson) and they have two children: Darcy and Travis.