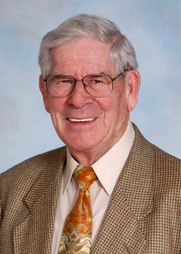 After graduating high school in Kremmling, Colorado, Robert Taussig attended Wheaton College in Illinois for two years before enrolling in Colorado State University's College of Veterinary Medicine, graduating with his DVM in 1945. Dr. Taussig married Mary Marth in 1945 and practiced briefly in Kansas City, Missouri before moving to Sioux City, Iowa. There they opened Morningside Veterinary Hospital and from 1946 to 1966 operated the hospital and food animal practice. After twenty years in Iowa, Dr. Taussig accepted a position as an instructor with the Department of Surgery and Medicine at K-State. In 1970 he was promoted to assistant professor, became director of hospital out-patient service and graduated with a Master's Degree in Urology.

In 1972, Dr. Taussig accepted an associate professorship on the faculty of Ahmadu Bello University, in Zaria, Nigeria. He worked on assignment from K-State through the U.S. Agency for International Development. The Agency had contracted with K-State in the mid-sixties to establish a veterinary medical teaching facility in Nigeria.

For Robert, the work in Nigeria was a combination of classroom instruction and an ambulatory clinic with nomadic tribal people. Making friends with the rural Fulani people was as significant as the on-site care for the Zebu cattle herds so dear to their owners.

Dr. Taussig continued with teaching at the CVM and shortly after returning from Nigeria was promoted to associate professor and became the Zoological Medicine section head at the teaching hospital, and later became principal veterinarian at the Sunset Zoo in Manhattan. While at K-State, Dr. Taussig made important advances in the recognition and treatment in the urinary diseases of cats.

The Taussigs continued their international teaching and travel in 1983 and 1984 when Robert, on sabbatical, became a professor of medicine and surgery in the veterinary medicine program at Ross University, Commonwealth of Dominica and St. Kitts in the West Indies.

Dr. Taussig officially retired from teaching at K-State on April 26, 1988. The retirement has been another exciting page turned for the Taussigs. International students and travel have ensued during their "retirement" years, including a two month-long Pacific Rim trip in 1994. This spring, Robert and Mary will be back in Nigeria, attending the 30-year anniversary of the Nigerian Christian Navigator organization they organized in 1974. Robert added, "We can't wait to return."

The E.R. Frank Award honors veterinarians who have contributed positively and significantly to Veterinary Medicine through their long term service to the Kansas State University College of Veterinary Medicine. Recipients all have a noteworthy record of significant service and contribution to both the profession and Kansas State University, and are recognized for achieving their success in an unassuming and unpretentious manner that emulates the professional essence of Dr. E. R. Frank.