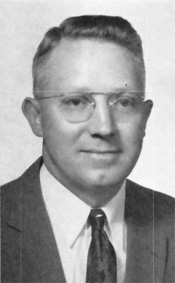 Dr. Swenson was born Jan. 14, 1917, near Concordia, Kansas, to John and Ida (Anderson) Swenson. He served in the U.S. Army Veterinary Corps from 1943-46. He married Mildred Rockey in Des Moines in 1947. Dr. Swenson received a master's degree in 1947 and doctorate degree in 1950 from Iowa State University. He was assistant professor at Kansas State University from 1950-56; he was physiology professor at Colorado State University from 1956-57; he was professor and head of the department of Physiology and Pharmacology in the College of Veterinary Medicine at Iowa State from 1957-73; he was professor of veterinary anatomy, pharmacology and physiology in the college of veterinary medicine at ISU and advised pre-vet. and veterinary students from 1973-87. He has been editor as well as contributor to four editions of "Duke's Physiology of Domestic Animals" and has served as editor of Experiment Station publications at K-State.

The Kansas State University College of Veterinarian Medicine alumni received awards from the college June 7 at the Annual Conference and Veterinary Medical Alumni Association Banquet at the Manhattan Holiday Inn/Holidome.