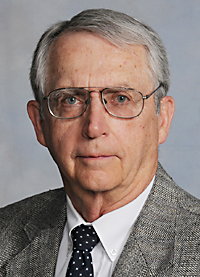 Dr. George A. Kennedy, retired, Manhattan, has been selected as the 2008 recipient of the E.R. Frank Award by K-State’s College of Veterinary Medicine and its Veterinary Medical Alumni Association. This award will be presented at the 70th Annual Conference for Veterinarians on June 4.

“Two things make this award really special to me,” Dr. Kennedy said. “First, it comes from our K-State graduates and the practitioners in and around Kansas. I’ve always felt honored and privileged to work with these veterinarians on a daily basis for so many years. To receive this award from them is a real honor. Secondly, while Dr. Frank was retired when I came here, he was still coming up to the teaching hospital and seeing patients. I worked with him on a limited basis, but enough to see what a fine veterinarian and wonderful person he was. He was very instrumental in establishing the great service ethic K-State is known for. To get this award bearing his name is very humbling.”

Dr. Ralph Richardson, dean of the College of Veterinary Medicine, said, “I cannot think of a more deserving recipient of this award than Dr. George Kennedy. I am quite certain that Dr. Kennedy’s humility, professional skills and service-oriented life would have been deeply respected by Dr. Frank. He has made a positive and lasting impact on our students, the profession and the public.”

Dr. Kennedy was born in 1940 in Chicago. He earned a bachelor’s degree in biology at the University of New Mexico, Albuquerque, in 1962, and earned a doctor of veterinary medicine degree from Washington State University, Pullman in 1967. At K State, Dr. Kennedy completed an internship and residency in large animal medicine and surgery from 1970 to 1972, and then a Ph.D. in pathology in 1975. That same year he also received his Board Certification in Veterinary Pathology from the American College of Veterinary Pathologists.

Dr. Kennedy was an instructor in the pathology department at K-State from 1972 to 1977. He was nominated for University Outstanding Teaching Award in 1974. From 1977 to 1978, Dr. Kennedy worked at the Veterinary Diagnostic Center at the University of Nebraska, Lincoln and then returned to K-State to work as a veterinary pathologist and director in the Veterinary Diagnostic Laboratory. He retired in 2004 after 33 years of service.

He has published or co-authored more than 60 research papers and case reports and has contributed to several editions of two textbooks. He has also participated in several audiovisual teaching projects and has served on dozens of committees and advisory boards.