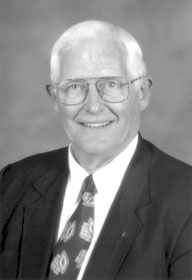 Dr. Russell A. Frey was honored as the recipient of the college's 2002 E. R. Frank Award. The prestigious award, which is sponsored by the Veterinary Medical Alumni Association, were presented at the 64th Annual Conference for Veterinarians dinner on June 3.

It has been a memorable 50 years since Dr. Frey, who was born and raised on a 240-acre dairy farm just outside Manhattan, graduated from K-State with a doctorate of veterinary medicine. He completed his final year of veterinary training in 1952 while serving in the U.S. Air Force Veterinary Corp. Following graduation, he served in the U.S. Air Force as a Base Veterinarian in Germany. In 1954 he moved to South Dakota to practice at a private veterinary clinic, which mostly focused on large animal care, before embarking on an impressive 37-year career in veterinary education at his alma mater.

Upon returning to Manhattan in 1960, Dr. Frey entered graduate school and served as a National Defense Education Act Fellow, which sought to enhance education of health care professionals. In 1963 he joined the K-State faculty in the College of Veterinary Medicine. Dr. Frey completed a PhD from K-State in 1970 and became certified by the American College of Veterinary Nutrition in 1988, to which he has served on the Board of Governors and Office Chairs.

His areas of expertise include digestive, renal and metabolic physiology and nutrition. He enthusiastically passed along this vast medical and veterinary knowledge to 40 classes of veterinary students, which earned him the honor of the Norden Teaching Award in 1966 and 1986. He served as Acting Head of the Department of Anatomy and Physiology in the mid-1960s and later served as Head of the department from 1975-1990. He was an adviser to the Student Chapter of the American Veterinary Medical Association for more than 30 years and has authored 25 publications and book chapters. The professor began a phased retirement from the university in 1995 and entered full retirement in 2000, although he instructed two veterinary classes on a contract basis during the past two fall semesters.

Just as Dr. Frey was entering partial retirement from K-State he was elected Riley County Kansas Commissioner, to which he is currently serving a second term. As Commissioner, Dr. Frey is deeply involved in countless public service efforts. He currently serves on the Executive Steering Committee of the Riley County Children, Youth and Families Planning Team; Manhattan/Riley County Health Board; and Riley County Law Enforcement Agency. He was active within National Association of Counties Platform Steering Committee by serving in Justice and Public Safety. He is currently President and Chair of the governing board of the Kansas Association of Counties and was President of the Kansas County Commissioners Association in 1999.

A large portion of his professional involvements were focused on the Kansas Veterinary Medical Association. Dr. Frey served in instrumental positions within the organization, including Treasurer, Trustee at Large, Vice President, President-Elect and President. He also served as a liaison for KVMA to the Kansas Legislature and as Kansas delegate to the American Veterinary Medical Association House of Delegates. He was voted as the 1991 Kansas Veterinarian of the Year. His dedication to KVMA earned him the President's Award in 1992 and 2001.

Beginning in 1987, he served a four year term as Vice President and President of American Association of Veterinary Nutrition. From 1994-2000 Dr. Frey served on the Board of Directors for the Mark Morris Institute, an arm of Hill's Pet Nutrition which aims to promote nutritional education in small animals. He is a longtime member of AVMA, having served on the Long Range Planning Committee from 1998-2001. He was also actively involved in the Academy of Veterinary Consultants.

In 1983 Dr. Frey joined a partnership with one of his sons to establish Frey Jersey Farm. The dairy farm is located just south of Wamego, Kansas, in Wabaunsee County. The elder Frey served as a representative to the State Board of Agriculture for the Kansas Jersey Cattle Club.