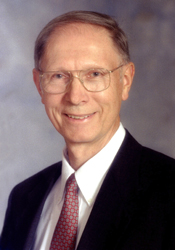 Dr. Howard Erickson, professor of anatomy and physiology at Kansas State University, is being honored for his service and contributions to the veterinary profession and to K-State.

Dr. Erickson has been selected to receive the Dr. E.R. Frank Award from K-State's College of Veterinary Medicine and its Veterinary Medical Alumni Association. The award will be presented at a June 5, 2006, reception, which is part of the annual Conference of Veterinarians.

The Dr. E.R. Frank Award is given to a faculty member who displays the same professional essence as Dr. Frank. This includes displaying an unassuming and unpretentious manner throughout one's career. A nominee also must have at least a 15-year relationship with the school and a noteworthy record of service.

Dr. Erickson, a K-State alumnus, has been a faculty member since 1981. “It is a real honor and privilege to receive this award, especially since I knew Dr. Frank and had him for a professor,” Dr. Erickson said. “He stands out as one of my main mentors while I was at school.”

He went on to the U.S. Air Force as a commissioned officer. While with the Air Force, he received a doctorate from Iowa State University in 1966. Soon after, he joined the faculty at the Air Force's School of Aerospace Medicine at Brooks Air Force Base in Texas. After nine years as a research scientist at the school, he was assigned to the Directorate of Research and Development in the Air Force's Aerospace Medical Division in 1976. During this time, Dr. Erickson also was an affiliate professor at Texas A&M University, Colorado State University and the University of Texas Health Science Center in San Antonio, and he helped train residents in laboratory animal medicine and surgery. Erickson retired as a colonel from the Air Force in 1981 and returned to K-State. Along with his teaching responsibilities, he has become a prominent researcher in exercise-induced pulmonary hemorrhage in horses.

Since 2002 Dr. Erickson has worked with faculty in K-State's College of Engineering on a veterinary telemedicine project. The goal of the project is to research and develop the infrastructure to support wearable remote monitoring devices that continuously assess the health of cattle in large herds and predict disease onset, whether from natural or terrorist events.

Dr. Erickson is very active with alumni, keeping in touch with his classmates and serving as secretary/treasurer for the Veterinary Medicine Alumni Association.