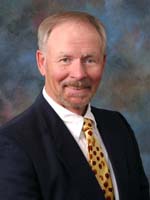 Dr. Robert Smith, Stillwater, Okla., is being honored with the 2006 Distinguished Alumnus Award by the Kansas State College of Veterinary Medicine and its Veterinary Medical Alumni Association. This award will be presented to Dr. Smith at the Alumni Center during the 68th Annual Conference for Veterinarians on June 5th.

The Distinguished Alumnus Award is presented to a veterinarian with an outstanding career who has contributed to the success of the veterinary profession through service and professional groups.

As a child on the family farm near Pittsburg, Kan., Dr. Smith found role models in the veterinarians who treated cattle on the farm. This interaction fostered a desire in him to pursue a career in veterinary medicine.

“Going to K-State was a great experience, and I have never regretted it,” Dr. Smith said. “There were dedicated faculty members that I was privileged to have learned from. They were good instructors and people who cared.”

To help him decide what area of veterinary medicine to pursue, Dr. Smith completed a large animal rotating internship at Oklahoma State University.

He stayed at Oklahoma State as a field services clinician until 1990. He then left to work at Palo Duro Veterinary Services in Canyon, Texas, for almost two years until he was asked to return to Oklahoma State to become the McCasland Chair in Beef Health and Production. Dr. Smith spent 11 years in that position and was involved in beef extension, research and industry services.

Dr. Smith is now a veterinarian with Veterinary Research and Consulting Services, a beef cattle practice with offices in Colorado, Wyoming, Iowa and Oklahoma.

He has also been involved with many professional organizations. Smith is currently on the board of directors for the Western Veterinary Conference and the United States Animal Identification Organization. He has also served as president of the American Association of Bovine Practitioners and the Academy of Veterinary Consultants.

“The key to providing good service to clients and patients is continuing education,” Dr. Smith said. “If we do not get involved in continuing education, the world will leave us behind. Also, it is important for us to give back to the profession as we try to improve animal welfare, health and production.”

Receiving the Distinguished Alumnus Award from his alma mater will be a great honor, Dr. Smith said. “K-State holds a very special place in my heart and life. It is humbling that a university and a college of veterinary medicine as prestigious as K-State would honor me in this way.”