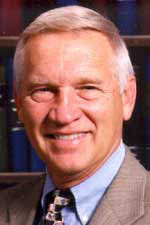 In Dr. Osburn's scientific career, he has emphasized the health and welfare of food animals, particularly cattle and sheep. He has been involved in key discoveries about food animal viruses—including the bluetongue and border disease viruses—developmental immunology, congenital infections and food safety. Dr. Osburn has produced more than 270 peer-reviewed publications. Forty-eight graduate students earned PhD's under his direction.

Dr. Osburn continues to broaden the School's role of veterinary medicine in animal, human and environmental health issues. Under his guidance, the School has established centers of excellence in comparative medicine, vectorborne disease, ecosystem health, equine analytical chemistry and other programs. He promotes comprehensive veterinary training programs to support veterinary students interested in research and academic careers. He helped institute a DVM/PhD program for veterinary students, a Masters Degree program in public health, and the Student Training Advanced Research summer program. He has increased the number of DVM students and residents and developed K-12 outreach activities to encourage the next generation of veterinarians. Dr. Osburn was instrumental in the establishment of the Western Institute for Food Safety and Security and the UC Veterinary Medical Center-San Diego. He has worked to help the School initiate $140 million in new building programs, raised more than $100 million in private support, and increased the annual research budget 100% to $60 million.

Dr. Osburn's role at the UC Davis School of Veterinary Medicine is one he feels very strongly about, "academic veterinary medicine plays a key role in preparing future graduates for serving society," Osburn said. At UC Davis, programs have expanded to address many non-traditional areas that are opening up new opportunities for the profession such as off-campus programs focusing on large livestock populations at Tulare, California, comparative medicine and captive and free ranging wildlife in San Diego, California, Marine Ecosystem Health in the San Juan Islands in Wash., as well as expanded programs in veterinary public health and public practice. The recently opened Western Institute for Food Safety and Security at UC Davis addresses foods of both animal and plant origin from farm to the consumer.

When questioned about his time spent at K-State, Dr. Osburn remarked, "Kansas State University was instrumental in providing me with an outstanding veterinary education. The faculty instilled confidence and served as excellent role models who were instrumental in shaping my career." Osburn added, "Lennart Krook and Marvin Twiehaus interested me in pathology and later steered me on to graduate work at the University of California. Most of my classmates were veterans, and their work ethic and focus were inspirational to the more junior members of the class." After more than 40 years in the profession, Dr. Osburn is as enthusiastic as ever: "The profession has much more to offer society than ever before, and this makes being a part of such a great profession dynamic and exciting."

Recipients of the Kansas State University College of Veterinary Medicine Distinguished Alumnus Award must have had an outstanding career in veterinary medicine, have made significant contributions benefiting his or her community, state and/or nation, and must have made humanitarian services and contributions to the veterinary profession and society rather than material success alone. This award provides K-State College of Veterinary Medicine with the opportunity to reach out and thank those who have made a difference.