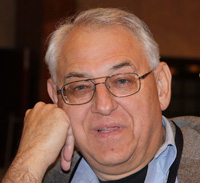 Dr. Thomas G. Ksiazek, Galveston, Texas, is the recipient of the 2015 Distinguished Alumnus Award from the Kansas State University College of Veterinary Medicine and Veterinary Medical Alumni Association. This award recognizes Dr. Ksiazek for his outstanding achievements, humanitarian service and contributions to the veterinary profession. This award is presented during the 77th Annual Conference for Veterinarians on June 7.

Dr. Ksiazek is currently director of high containment laboratory operations for the Galveston National Laboratory at the University of Texas Medical Branch. He is also director of the National Biodefense Training Center and a world-renowned virus expert with 40 years of experience on the front lines of some of the worst outbreaks the world has ever seen. In August 2014, he led the U.S. Centers for Disease Control and Prevention Ebola outbreak control operations, assisting the government of Sierra Leone in Africa.

Dr. Ksiazek earned his DVM from K-State in 1970, and then spent a year as associate veterinarian, at the Adirondack Animal Hospital in Glensfalls, New York. He started his military career when he joined the U. S. Air force in 1971, holding a position that year as Base Veterinarian at Sheppard Air Force Base, Texas. He then worked as Chief of Veterinary Services, Royal Air Force Chicksands, United Kingdom.

“It’s an honor to be recognized by the institution where my professional career began,” Dr. Ksiazek said. “The solid basic science foundation at the Kansas State University College of Veterinary Medicine provided the basis and stimulus for the career that I’ve been fortunate to have had.”

“This is a special opportunity for me personally to recognize a classmate from the same graduating class in veterinary college,” said Dr. Ralph C. Richardson, dean of the College of Veterinary Medicine. “I have great admiration for Tom as a person and how his career has progressed over the years. He is a shining example of how the One Health initiative works. His impact on understanding disease like SARS, Hantavirus and Ebola may well be unprecedented in the biomedical community. As an alumnus, he has been a great representative, not only for our college, but for Kansas State University and the entire veterinary profession. This is indeed a well-deserved honor.”

“Dr. Ksiazek is a perfect example of the role that veterinarians play in helping to battle emerging and zoonotic infectious diseases on a global level,” said Dr. Tammy Beckham, director of the Institute for Infectious Animal Diseases in College Station, Texas. Dr. Beckham has been named as the new dean at the College of Veterinary Medicine and will take over for Dr. Richardson on Aug. 2. “I am honored to have served with Dr. Ksiazek on the Texas Task Force for Infectious Disease Preparedness and Response and know that the work that he performed during the most recent Ebola outbreak in Sierra Leone helped to save many lives. Dr. Ksiazek is extremely deserving of this award.”

Dr. Ksiazek has worked as a Veterinary Microbiologist performing virology research at stations around the world for the U.S. Navy, U.S. Air Force and then for the U.S. Army at the Disease Assessment Division at Ft. Detrick in Frederick, Maryland. He then served as Chief, Rapid Diagnosis Section, Department of Epidemiology, Disease Assessment Division, at Ft. Detrick.

Dr. Ksiazek and his wife, Shirley, have a daughter, Sarah. His personal interests include woodworking and recreational welding.