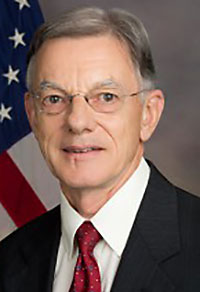 Dr. David R. Franz, Frederick, Maryland, is the recipient of the 2016 Distinguished Alumnus Award from the Kansas State University College of Veterinary Medicine and Veterinary Medical Alumni Association. This award recognizes Dr. Franz for his outstanding achievements, humanitarian service and contributions to the veterinary profession. This award is presented during the 78th Annual Conference for Veterinarians on June 5.

Dr. Franz earned his D.V.M. from Kansas State University in 1970 and a Ph.D. in physiology from the Baylor University College of Medicine in 1980. After spending a year as an associate with the Hutchinson Small Animal Hospital in Hutchinson, Kansas, Dr. Franz was commissioned as captain in the U.S. Army in 1971. His first veterinarian duty assignments were at MEDDAC, Ft. Hood, Texas, where he was general veterinary officer and the 10th Special Forces Group (Airborne) at Ft. Devens, Massachusetts, where he served as Group Veterinarian and developed a training program for the use of pack animals in unconventional warfare.

“It was the Midwest, small town K-State culture of the late 60s and the versatile DVM degree that launched my most rewarding, enjoyable and – at the time – unusual career” Dr. Franz said. “I thank the college’s excellent leaders, past and present, and our professors many whose names now identify campus buildings. I thank my friends in the class of ’70 for their influence, camaraderie and continued professional friendships 46 years later. Finally, I encourage today’s students to pursue what they love and truly care about; you are better informed and more adventuresome than I was when I left the college – and you have the tools of the IT and biotech revolutions with which to work for the good of animals and their people in this ‘global petri dish.’ Your DVM from Kansas State University is a ticket that will allow you the opportunity to make a difference all across the ‘One Health’ space.”

Dr. Franz was the chief inspector on three United Nations Special Commission biological warfare inspection missions to Iraq and served as technical advisor on long-term monitoring. He also served as a member of the US-UK teams that visited Russia in support of the Trilateral Joint Statement on Biological Weapons and as a member of the Trilateral Experts’ Committee for biological weapons negotiations. He was technical editor for the “Textbook of Military Medicine on Medical Aspects of Chemical and Biological Warfare” released in 1997. Current standing committee appointments include the National Academy of Sciences Committee on International Security and Arms Control where he chairs the “biological panel,” American Society for Microbiology Committee on Biodefense of the Public and Scientific Affairs Board, and the Senior Technical Advisory Committee of the National Biodefense Countermeasures Analysis Center (DHS). He serves as a senior mentor to the Program for Emerging Leaders at the National Defense University. He also serves on the boards of the Elizabeth R. Griffin Research Foundation and Integrated Nano-Technologies LLC. Dr. Franz holds an adjunct appointment as professor for the Department of Diagnostic Medicine and Pathobiology at the College of Veterinary Medicine, Kansas State University. The current focus of his activities relates to the role of international engagement in public health and the life sciences as a component of global biosecurity policy. Domestically, he continues to encourage thoughtfulness when regulating research in the name of security, thereby minimizing negative impact on progress in the life sciences.

Honors while at K-State and honor society memberships include: Kansas State University Outstanding Small Animal Clinician, 1970, Upjohn Outstanding Small Animal Clinician Award, 1970, Gamma Sigma Delta and Phi Zeta honor societies. He was recognized by Kansas State University as an Alumni Fellow for the College of Veterinary Medicine in 2005, and he received an Alumni Recognition Award for military and government service in 2003.

Dr. Franz and his wife, Patricia, who graduated from K-State in 1970 with a degree in family and child development, have two adult children: Matthew and Eric.