The Two Sides of COVID-19: Pandemic and Economy, a French Connection

To date, if experts fail to predict the cost of the novel coronavirus 2019 (COVID-19) pandemic, then no one can measure the consequences on different economic sectors. The political decisions urgently taken to protect countries against the rising pandemic have immediately paralyzed all economic sectors. A reasonable cost/benefit ratio could not be established in advance because of the sudden onset of COVID-19. However, despite limited temporal perspective, some implemented strategies seem to be more effective than others. The following article is not a work from an expert in economy. Indeed, it is a point of view from an "honest man", in the given sense of the XVII century in line with Montaigne, Descartes, or Boileau thinking. In it, we will discuss various aspects of the pandemic and the economy with focus on the situation in France. In France, an instant look into the COVID-19 outbreak situation is mapped in the figure below (Figure 1).

To protect the population. All governments have chosen to take drastic measures to protect their hard-pressed populations in this inedited public health event. These procedures were and are mainly characterized by social distancing as well as isolation from workplaces and social interactions. The question is not whether a human life is worth more than a Gross Domestic Product or GDP point, but rather if this protection is not disproportionate to the risk associated with that of a pandemic. In France, multiple attempts to protect the population have exposed the weaknesses of the health system, laminated by years of under-investment and questionable management. The French have long praised the centralization of the French health system, as compared to the regionalization of the Italian system, while forgetting that the German Federal system has been far more reactive to the coming pandemic. The management of personal protective equipment and screening tests is a caricatural example of this downfall in the French public health system. Therefore, the deployment of patient care among public hospitals, private clinics, laboratories of medical biology, and military health services has been clearly delayed getting into battle.

Direct socio-economic consequences of the containment phase. The primary measure of containment (i.e., quarantine) was implemented to slow down the overwhelming situation of the medical emergency services and allow them to fully ensure their mission. Such containment was done by discontinuing the economy in a broad sense. The closure of schools and social places (i.e., cafes, restaurants, non-food stores, performance halls, sports grounds), factories, and construction sites occurred, followed by draconian restrictions on the free movement of people all began working against the economy. Several trade markets were able to exercise remotely (via teleworking), but many activities were stopped. Therefore, the actual crisis reflects a deliberate reduction in production and this extends to all service sectors. These measures were acquired at the cost of a considerable and probably necessary reduction in public freedoms, which adds to the fears of this new plague.

Expected consequences from the de-containment phase. Containment measures are often well understood, accepted and generally respected by the French population, however the question of the legitimacy of these measures arises again with the period of decontainment that follows. Indeed, this decontanment phase will require extremely delicate planning in order to avoid a rebound of the epidemic. Moreover, it will be difficult for the sectors of the economy affected by this early deconfinement phase to decontextualize the primary and secondary sectors, as it will encourage the institutionalization of barrier measures (e.g. distances, masks, hygiene) between various enterprises. Similarly, it will not be easy to implement this in a gradual manner and ensure the non-transmission of the virus. During this initial phase, other sectors of the population will need to prolong their containment to rotect the at-risk populations (elderly or carriers of comorbidity factors). Likewise, if determining age threshold for the “at-risk” population is difficult, accounting for the comorbidity factor is nearly impossible. A feeling of discrimination is already discernable, raising the question about the legality of the process or if it is even contradictory with the national constitution. Therefore, a social gap has opened between the “privileged” who have been able to continue practicing their profession and the others who must wait for the resumption of activities even if it is to protect their health.

Financial consequences. Financial measures have been taken to compensate the partial loss of wages. The sales and turnovers of companies are much more difficult to evaluate for artisans and traders in market sectors during the containment. For instance, they still have orders delivered to their closed shops, and rent or additional charges are expected to be timely honored despite the interruption in cash flow. Hotels, catering, and leisure transport sectors are most notably affected. However, these financial supports are cumbersome to implement, and more importantly, do not cover the entire loss of the economy. For the self-employed, no insurance offered contractually covers the loss of activity due to a pandemic. Figure 2 shows the main labor sectors hit by the COVID-19 pandemic in France as of April, 2020. The dramatic side-effects of containment on open economics and social crisis is the worst and most rapid since the post–World War II economic boom in 1945, which was followed by long-term business cycles with multiple economic crises starting in 1970s. To what extent will the deliberate cessation of production and commercial activity affect the economy in the short- and long-term future?

The de-containment phase (which should induce a reopening of activities and eventually justify a temporary increase in working time) faces general opposition from social partners. Despite the necessity of the general health system, it was very noticeable that its dedicated staff and partners were not overwhelmed with thanks. In addition, several once disdained and invisible professions, like supermarket cashiers, garbage collectors, and cleaning agents, have new found public favor and recognition from the entire European population. The unemployment figures are increasing, but not necessarily to the extent of the strong welfare state observed in the United States. According to a Goldman Sachs survey, half of small businesses could not survive confinement for more than three months (Salomon, 2019; Vissiere, 2020). If the 1929 crisis - known as Great Depression that started in the United States and extended worldwide after a major fall in stock prices - had generated the welfare state of the United States, it is legitimate to expect that the current crisis will eventually accelerate the establishment of a more generous social security system among the industrialized countries. 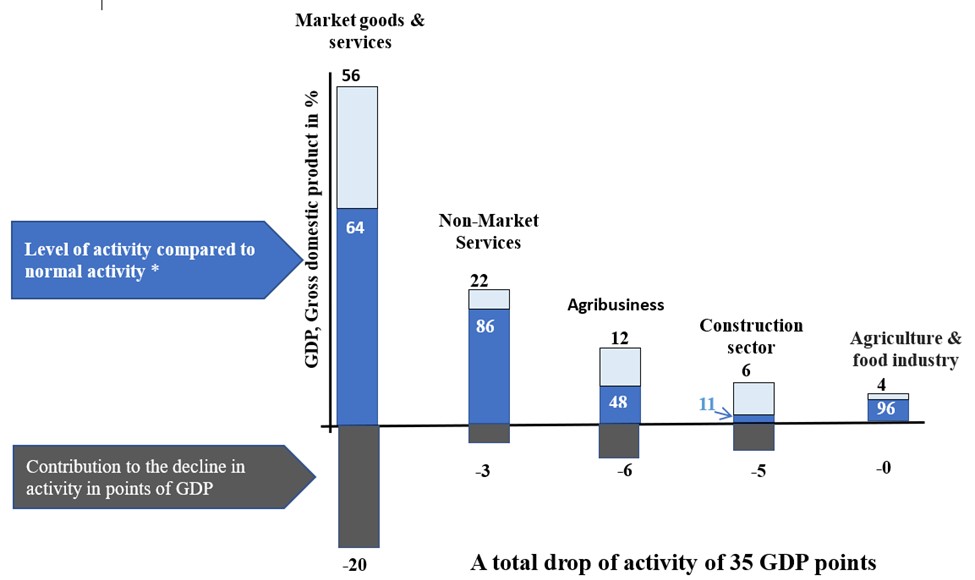 Conclusion. It would be difficult for all sectors of society to envision a post-COVID-19 pandemic period as a past event without major consequences. The pandemic risk deeply affects the organization of societies while showing the necessity of analyzing situations and drawing all the conclusions from it, and above all, the lessons learned. The lessons everyone are now being forced to learn offers a viewpoint that goes beyond the European western peninsula. One state by itself cannot do such preclusive thinking without needing to enact a policy to prevent future pandemics. Indeed, in different countries and at different levels, the organization of the health system should be audited for better efficiency. The concept of health independence (e.g., health system goods, health insurance, health capital) must be adapted to accommodate the needs of a pandemic. The abysmal deficits that have widened in most countries will need to be addressed; however, it seems no one has a clue on how to face such an inedited global economic situation.

Globally, the COVID-19 pandemic could directly cut GDP by several trillion dollars, and indirectly, by the destruction of wealth in a stock market crash. For example, in two months, the US economy has lost $20,000 billion. While our industrial and capitalist societies were described as obsessed with money, all of them chose to sacrifice their economic and financial interests to protect the health of their people (Delhommais, 2020).

It is no longer necessary to denote the interactions that exist between the health, social, economic, and political sectors. This is an essential time in history where a vision of “One Health for all” can be seen working across all sectors of society. Overall, this is the time for a comprehensive health policy including all human environments…a Global One Health.

Next story: Pandemic: Learning From the Past, Be Prepared For the Future