Pandemic: Learning From the Past, Be Prepared For the Future

This article will review the history of pandemics, their impact on medicine and public and veterinary health as well as on societies and politics when appropriate. This paper will show that only lessons of history can help humanity understand how environmental factors, information sharing, societal communities, human nature, and life sciences work together in tandem during pandemic conditions. These constitute the integral foundation needed for an explanatory approach of pandemics and the best way to prepare and respond to these scourges. This article will demonstrate sequentially how a transdisciplinary approach is perfectly adapted to the One Health concept. Therefore, it will follow the red line of pathogen emergence from the fundamental domains of a pandemic origin, sustained by some exemplary ones, and how we can be prepared for “The Coming Plague” (Garett, 1994).

First, let us define a few terms. An outbreak occurs in a community, while an epidemic appears to be limited to a country or to a health system of a territory (e.g., region, Province) with a risk of spreading beyond its borders to neighboring countries. The potential of disease extension lies principally on the increasing mobility and rapidity of transport of travelers and goods. The main difference between an epidemic and a pandemic is the geographic (territorial or continental) extent and incidence (referring to the population density) of both an infectious and a non-infectious disease.

Fundamentals of the Epidemic Risk

An epidemic (from the Latin “epidemic”, which means “at home”) corresponds to the result of an outbreak (sudden emergence of one or several clinical cases) with a rapid extension of a contagious disease among a large population. The epidemic is then limited to a region, a country, or a geographically well-defined area. On the other hand, a pandemic (Greek “pan” or “all” and, “demos” or “people”) is an extended epidemic that includes multiple outbreaks directly or indirectly, connected one to each other and threatening the entire population of one or more continents. A pandemic has specific risk factors of extension associated with trade and exchanges, population density (urban area), and access/availability of proper care from the health systems (disparity). The health consequences of a pandemic depend on the virulence and infectiousness of the pathogen, its impact on the health system, and the population vulnerability. The socio-political and economic consequences depend on morbidity and mortality among the workers of various economic sectors. The following section will illustrate the epidemic risks that have emerged in humanity and the lessons to be learned for the future.

From the Neolithic to the Industrial Revolution

Population density, mobility, and immunity are the three factors underlying the equation of epidemic risk, and ultimately, the threat of pandemic risk. Immune risk depends on the vulnerability (host susceptibility to infection), the chance of encounter between the host and pathogenic agent, and its characteristics (i.e., virulence, infectiousness). Altogether, this is what Sorre called a “pathogenic system” (Sorre, 1933) (Figure 1). 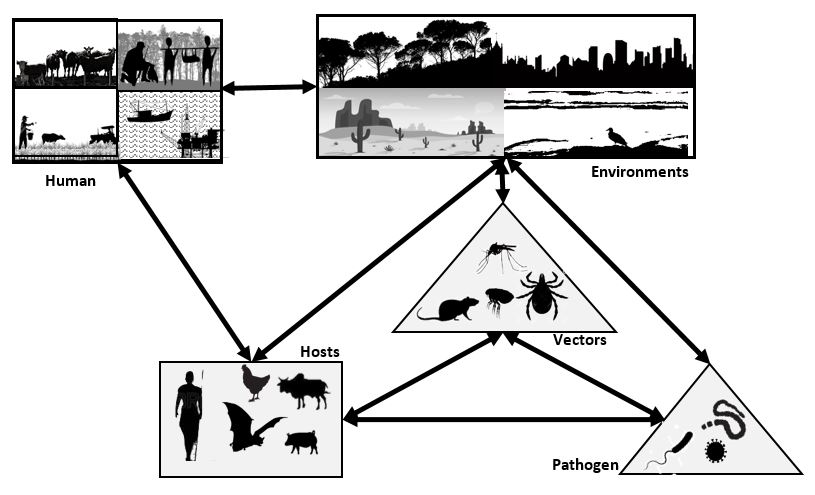 The tree of evolution considers that bacteria and viruses existed before the appearance of man and probably before all other metazoan life forms on earth. Before the Neolithic revolution, at the start of the quaternary era, 1.5 million years before present (my BP) day (1.5 my BP), the first humans remained very dispersed and only on the Central Eastern African cradle (i.e. present day Omo Valley in Southern Ethiopia) of modern humanity. The first out-of-Africa migrations were possible thanks to cultural progress (fire control, subsistence rules, choice of game), allowing progression toward the Middle East 1.4 my BP (Kozlowski, 2005). A second great migration then reached South Asia to southern China around 0.7 my BP, and then, to Western Europe (0.6 my BP), toward Asia (0.4 my BP). All migrations consisted of isolated, nomadic tribes in which the pathogen could find its host, but whose structure (density) did not allow an outbreak - let alone an enlarged epidemic event. Due to this threshold of population density necessary for an epidemic manifestation, it would only appear when modern man began living in “cultural units” that an epidemic risk could occur (28,000 years BP). These cultural units also demonstrated a great deal of migratory power, but over long periods that were incompatible with pandemic risk. However, the Neolithic revolution (10,000 years BP) became a decisive moment that prepared man to gather and settle into an agricultural and pastoral lifestyle. Mobility around the settlements in search of/exchange of food and ceramics to preserve food ensured a constant diet. Constant nutrition greatly reduced mortality and promoted a remarkable increase in population density (Figure 2).

Figure 2. The Rise of Humanity: World Demography Evolution. A. Logarithmic Population Scale; B. Linear Population Scale. Population in millions of inhabitants as a function of time between 10,000 BCE and today. The values are estimates and the pre-1800 years BP (Before Present) values are to be taken as an indication. The curve shows a continuous increase of the world population with rapid growth during the 19th and 20th centuries that continues today. (Source: Cacharel & Harris, 1998)

The human population then increased significantly, close to 100 million individuals around 2,000 years BP. A maximum threshold of 250 million inhabitants was reached in the 1st century BP, then decreased to around 200 million at the end of antiquity. During the Middle Ages, the population began to increase again. By the 15th century, an estimated total global population of around 500 million people existed. Wars, famines, diseases, and epidemics (including plague, cholera, typhus) limited the growth of the Earth's population. Until about 1700, the number of humans increased slowly, struggling to reach 700 million. Nevertheless, the bar of a billion inhabitants on Earth was reached at the beginning of the 19th century (around 1825).

This section will review several important pandemics throughout the ages, further summarized in Table 1. 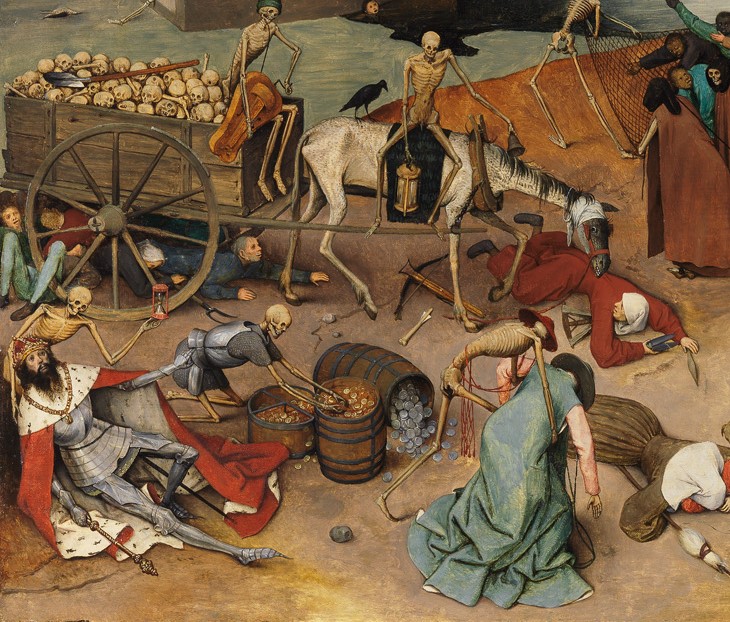 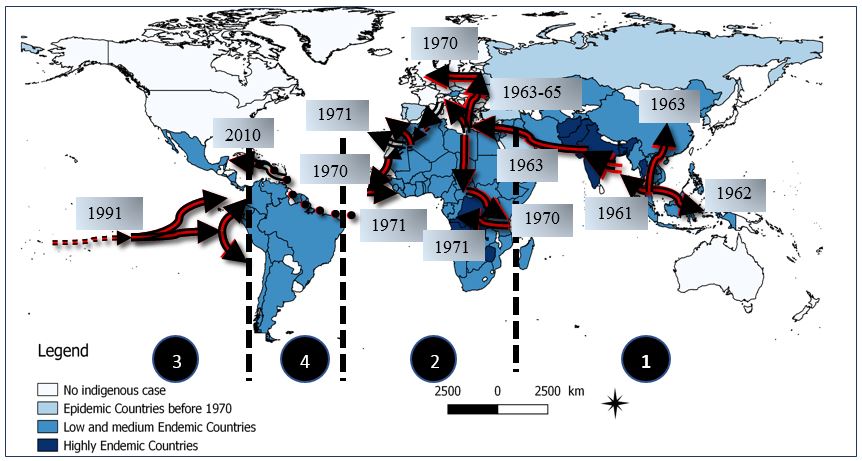 Have we learned from past epidemics and those still present?

The saga of pandemics continues today and should keep us on the alert, never letting our guard down. Infectious diseases have swept the world for a very long time, killing millions of people, causing considerable historical upheaval, and transforming the future of entire populations. Scientists and communities have learned about the modes of disease transmission and pathogen virulence, using this basic knowledge to develop tools and strategies to combat epidemics.

In the last two centuries, microbiology has truly emerged as a science on its own with fundamental concepts created by Louis Pasteur, Robert Koch, and other numerous scientists. Several epidemics have been widely analyzed and yielded immense knowledge: the natural transmission cycle of yellow fever and its vaccine; dengue fever virus genotypes, their spread, and the host immune response; and the natural transmission cycle of EBV and how to respond and be prepared for outbreaks. Other pathogens are remarkable because of their vast epidemic expansion and increased risk of transmission beyond natural borders. Such diseases include hemorrhagic fevers, arboviruses (e.g., chikungunya fever, Rift Valley fever, West Nile encephalitis), and Zika-related diseases. All these emerging episodes seem very closely linked to the changing human and physical environments, resulting in explosive situations. Beyond the criteria directly related to the disease (virus, transmission, medical countermeasure available, etc.), it is the fear of those responsible for public health that have led to the desire of scientists to understand the threat and offer solutions to the public. Therefore, these often-unexpected epidemics pressure the health authorities to act as soon as possible in order to limit the damage the disease may cause.

Humanity must once again review the fundamental elements at the origin of new pathological emergences. As recently pointed out by Maurens and Fauci (2020), pandemics, such as COVID-19 are “not entirely new phenomena”, while several coronaviruses must have “emerged and spread pandemically in the era prior to the recognition of viruses as human pathogens”. Indeed, coronaviruses demonstrate the risk of interspecies jumping and acquiring a zoonotic profile (Figure 5). SARS-CoV-2 also surprised us with its extremely high infection rate (or its basic reproduction number, R0), a morbidity that overwhelmed the medical care systems of all affected states and countries, and the economic consequences never seen before. 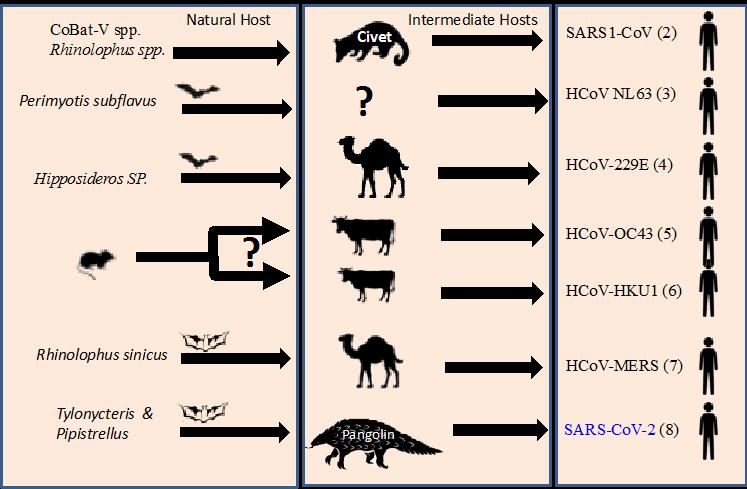 A One Health Solution

All these examples scattered throughout human history clearly show that the One Health concept is essential in understanding and responding to these epidemic emergencies, and in turn, the risk of pandemics. Indeed, we have seen how life sciences, social and human sectors, health decision-makers, economists and politicians have reacted (often in disparate ways) to the sudden, unexpected emergence of a pandemic. However, opinions vary on how to best react in order to mitigate the series of hardships generated by dramatic public health situations, disruption of supply chains, and the closure of borders.

Thus, within the framework of a “One Health” approach so that the affected society has the means to recover effectively when social and media resources are depleted and the existing health system shows weaknesses, the way forward will become obvious to decision-makers. The latter then, in health in the broadest sense, must seek scientific expertise to identify immediate solutions to current ills and to improve future “preparedness”. Research during this pandemic has been performed in a hurry and under pressure from all the societal sectors concerned. Therefore, a One Health policy must be put into perspective. Other epidemics are on the horizon. We must learn from the past in order to prepare ourselves for future emerging events, and above all, show strong resilience during these inter-epidemic periods when other priorities distract society and its decision-makers. Emergency funding is one of the main necessities during a pandemic response effort. Funds must be freed from administrative constraints and directed to the most local manifestation of the epidemic, as we learned from the recent EBV disease epidemics. It is necessary to anticipate international partnerships to manage the scale of these unpredicted disasters.

How ready are we for the next pandemic and prepared for the worst?

“...whenever a new, especially successful form of an infection emerges, it will spread rapidly around the globe.” - William H. McNeill, 1998, Plagues and Peoples

The ultimate goal of response is to develop a resilient global health infrastructure. The acquisition of treatments, vaccines/other preventive drugs, and biomonitoring remains essential to prevent the emergence and spread of any new disease. So far, only the states of the Western Hemisphere appear to have an extensive and well-established surveillance system. The World Health Organization (WHO), World Organization for Animal Health (OIE), and other international agencies favor global surveillance which confronts the disparity of states and peoples.

The world is in an intermediate phase of trying to reduce health disparities despite exponential population growth, political conflicts, migration, world trade, urbanization, and major environmental changes due to global warming. For the good of mankind, we must focus on building the capacity for health surveillance, for preparedness of epidemics, and for rapid, effective responses to any looming pandemics.

Table 1. Pandemics through the centuries (Please see the references (#) of Table 1 listed at the end of this article).
Table 1. Legend:
[i] Total or estimated number of cases (Case Fatality Rate percentage);

[ix] Of the World population

[x] Germany, Yugoslavia and then discovered in Africa

Next story: Using NASA’s Earth Observations to Predict, Monitor, and Respond to Vector-borne and Water-related Disease