One Health for One Planet Education (1HOPE): The Story So Far

Did you know that Earth observing satellites (EOS) are being used to help reduce the threat of vector-borne and water-related diseases globally and to contribute to our understanding of the links between humans, animals, and the environment? The Global Precipitation Measurement (GPM) mission’s Outreach and Applications Team led the GPM Disease Initiative to further explore the links between research and operational applications of NASA’s EOS data for disease-based applications. GPM is an international satellite mission that provides global observations of rain and snow. These data have a great number of real-world applications, including being used to predict, monitor, and respond to vector-borne and water-related diseases (Kirschbaum et al., 2017).

The GPM initiative included the presentation of case scenarios from scientists using EOS data in operational applications related to disease, the development of two online training webinars, and the organization of a one-day workshop. The goal of these efforts was to increase the awareness among stakeholders across many fields that these EOS data assets were freely available, as well as to engage stakeholders in rich discussions that examine the opportunities and challenges of using EOS data in public health applications.

Vector-borne diseases. According to the World Health Organization (WHO), vector-borne diseases are responsible for over 17% of all the infectious diseases globally (WHO, 2017a). Vectors are living organisms capable of transmitting diseases from human to human, from animals to humans, and from animal to animal. Many of these diseases are preventable through protective measures, provided that local authorities are aware of potential transmission risks from animal reservoirs. The most common vectors include mosquitoes, ticks, sand flies, and fleas, which can transmit diseases such as malaria, Lyme disease, schistosomiasis, and Bubonic Plague, respectively.

Many EOS datasets can be used to identify environmental conditions that may facilitate the transmission of vector-borne diseases. For instance, the precipitation levels and evapotranspiration rates of water can help scientists determine if transient bodies of water could exist long enough to support mosquito reproduction. This information could then be used to make a log of potential bodies of water that could be treated to prevent malaria-infected mosquito reproduction in endemic areas.

Water-related diseases. Water-related diseases occur when people ingest water contaminated with human or animal feces. They may occur when a variety of microorganisms, biotoxins, and toxic contaminants are found in freshwater drinking sources. These diseases are directly related to water presence, sanitation, and quality, resulting in widespread impacts on populations. They may result in diarrheal diseases, defined by the WHO as “the passage of three or more loose or liquid stools per day” (WHO, 2017b). These diseases constitute a serious public health threat and are the second leading cause of death in children under five years old (WHO, 2017b).

Cholera is an acute diarrheal illness caused by the toxigenic bacterium known as Vibrio cholerae. NASA’s Applied Sciences Program funded research which used a variety of NASA satellite observations, such as precipitation, air, and ocean temperatures as well as measurements of phytoplankton concentrations in nearby coastal ocean areas, were able to predict where cholera was most likely to occur (Jutla et al., 2017).

Developing Models to Predict and Respond to Malaria

Malaria is spread by the Anopheles mosquito and can result in severe fever and headaches. It is particularly dangerous for children who live in secluded rainforests far from medical care. Ben Zaitchik (Johns Hopkins University) and his team have been conducting research in the Peruvian-Amazon region to predict and respond to the threat of malaria. In the last five years, the number of malaria cases spiked, causing Peru to have the second highest average of malaria cases in South America. In 2017 alone, Peru documented 55,000 cases of malaria within its borders (Zaitchik, 2017). To mitigate malaria outbreaks, public health officials need to determine where people are contracting the disease. If an inaccurate determination is made, then resources such as insecticide-treated bed nets and indoor sprays can be distributed to the areas with lower infection rates, allowing the outbreak to grow.

Sensitive to environmental changes and impacts of human development, Anopheles mosquitoes have increased their range and present as an invasive species in new locations around the world. Thus, EOS data that measures environmental parameters proves quite useful, especially in regions lacking the technology to monitor these variables from the ground or air. By identifying malarial “hot spots”, the government health officials are better able to use their resources effectively (Recalde et al., 2019). Project findings identified several human interaction factors, such as deforestation and land use, have significant impacts on malaria incidence. From the One Health perspective, it is imperative to recognize that the interaction between humans, animals, and the environment is the key to understanding disease outbreaks. NASA’s Goddard Space Flight Center (GSFC) produced a video entitled “Predicting Malaria Outbreaks with NASA Satellites” to highlight the efforts being undertaken by Zaitchik (Johns Hopkins University) and others. 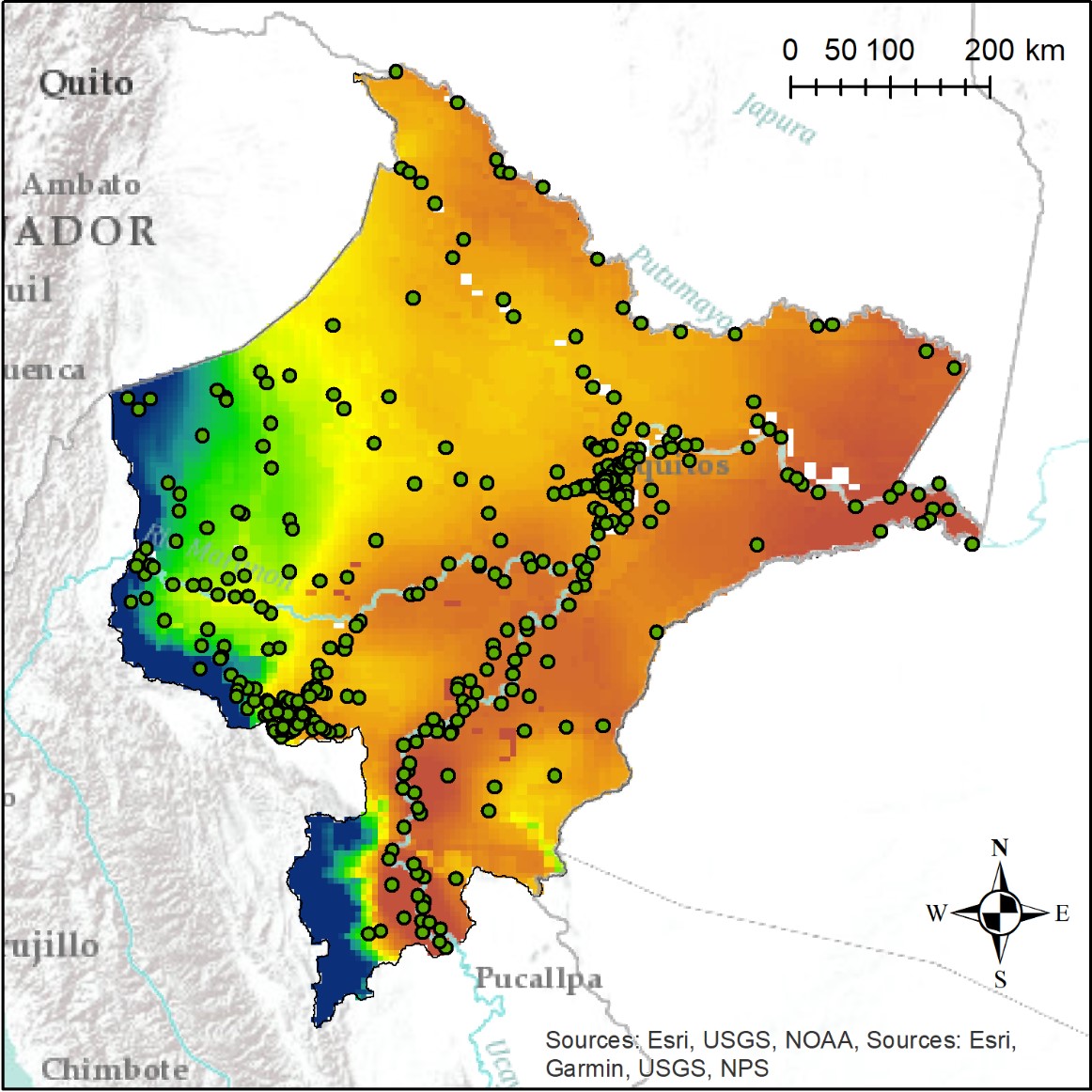 Using Precipitation Data to Assess the Risk of Cholera Outbreaks

Prediction of an outbreak of diarrheal disease, like cholera, following a natural disaster remains a challenge, especially in regions lacking basic safe civil infrastructure. The underlying mechanism of a cholera outbreak is associated with disruption in human access to safe drinking water, sanitation, and hygiene (WASH) infrastructures which results in the population using unsafe water containing pathogenic Vibrios. Presence and abundance of V. cholerae are related to both environmental and regional weather conditions. For example, when Hurricane Matthew made landfall in Haiti in 2016, heavy three-day rainfall resulted in flooding and landslides. This altered the WASH infrastructure, as safe water sources were severely damaged or left unusable (Jutla et al., 2017). Increased precipitation can overwhelm the sewage systems and allow V. chorerae to enter the drinking water. As more people move into populated areas, existing water and sanitation infrastructure are strained, increasing the risk of contracting cholera.

Antar Jutla (West Virginia University) and his team have characterized major cholera outbreaks as occurring in two dominant forms. First, the epidemic form is characterized by a sudden, sporadic occurrence of many cholera cases. Second, the endemic form of human cholera occurs on annual scales with distinct and characteristic seasonality, meaning that warmer seasons result in greater numbers of outbreaks. Natural disasters characteristically leave a trail of destruction as the population may be deprived of access to adequate WASH infrastructure, resulting in increased cholera cases.

Under normal circumstances, the likelihood of a cholera outbreak is low because the human population adapts to a specific behavioral patterns of water use. Following a natural disaster, human behavior will change when the availability, use pattern, and storage capacity of drinking water are altered as a result of the WASH infrastructure being severely damaged and/or rendered unusable. Forecasting a cholera risk is challenging because of the lack of data on pathogen abundance in local water systems, weather and climate patterns, and existing WASH infrastructure. Vibrios, including V. cholerae, are a normal part of the natural aquatic ecosystem meaning eradication is not feasible.

This work done by Jutla (West Virginia University) and others (Khan et al., 2017) demonstrates how a new modeling approach using EOS will likely enhance the ability to develop cholera risk maps in several regions of the globe. This model is based on monthly air temperature, precipitation, availability of WASH infrastructure, population density, and severity of the natural disaster. NASA’s GSFC developed a video entitled, “Using Precipitation Data to Assess Risk of Cholera Outbreaks”.

The GPM Disease Initiative engaged public health responders, practitioners, and researchers who may have been previously unaware of how EOS data may advance their operational decision making. To inform the audience, the GPM Disease Initiative developed case scenarios to showcase the work of scientists using NASA’s EOS data and model products freely available to the public. Two levels of online trainings were developed to share how NASA’s EOS data were being used to predict, monitor, and respond to vector-borne and water-related disease. Participants also learned how to access and integrate these environmental parameters.

The Vector-borne and Water-related Disease Workshop was co-led by NASA’s GSFC and The Wilson Center at The Wilson Center in Washington, D.C., on May 17, 2018. More than 100 scientists, public health practitioners, citizen science/outreach specialists, and local community members attended this workshop. The workshop was designed to bring diverse stakeholder communities together. Three panel discussions focused on emerging research, public health, and citizen science. The keynote presentations and breakout session highlighted how NASA’s EOS data could be used to determine when and where outbreaks might occur as well as to consider the opportunities and challenges that could use EOS data for these applications. 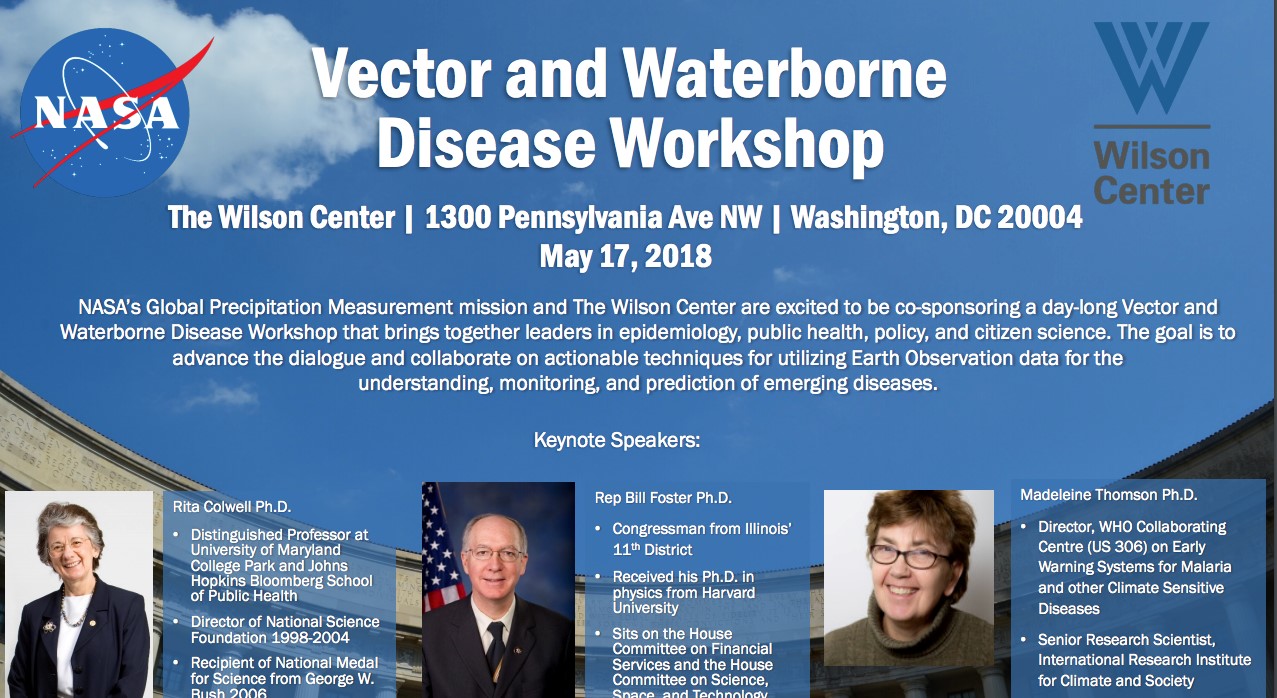 The main objectives of this workshop were:

There were three main take-away points from this workshop. First, it demonstrated the importance of exposing stakeholders to the array of EOS data already being used to predict, monitor, and respond to these types of disease outbreaks as well as the potential for new data applications within this area. Second, it highlighted the value of working closely with stakeholders to ensure that needed data are accessible and meet stakeholder specifications. Third, it encouraged the continued momentum and dialogue following this workshop, where a community of these diverse stakeholders was formed through the collaborative software, BaseCamp. The initiative started to disseminate a quarterly newsletter, highlighting new research, partnerships, and opportunities.

Through the elements of this initiative, NASA and its partners are working to expand the pathways between the diverse stakeholder communities. The goal of this effort is to keep avenues of communication and collaboration open in order to move towards a greater understanding of the complexities, needs, and challenges when using the freely available NASA EOS data for the prediction, monitoring, and response to vector-borne and water-related disease. For more information on how satellite data are used within the field of vector-borne and water-related disease research and operations, please visit the Disease Initiative website.

WHO. (2017a). Vector-borne diseases. Available at: https://www.who.int/news-room/fact-sheets/detail/vector-borne-diseases

WHO. (2017b). Diarrhoeal diseases. Available at:https://www.who.int/news-room/fact-sheets/detail/diarrhoeal-disease

Next Story: A Beginner’s Guide to Pandemic