The veterinary student population in numbers from the AVMA.

The number of veterinary students who attend Association of American Veterinary Medical Colleges' member institutions—30 U.S., five Canadian, and 14 other international—is going up.

There are currently 13,323 veterinary students studying at U.S. institutions, an increase of 2.3 percent from last year. Of that total, 19.6 percent are from historically underrepresented populations in veterinary medicine, up 1.1 percentage points from last year, according to the 2018-19 AAVMC Annual Data Report.

Historically underrepresented populations are identified by the AAVMC as populations of individuals "whose advancement in veterinary medicine has been impacted due to legal, cultural, or social climate impediments in the U.S., specifically by gender, race, ethnicity, geographic, socioeconomic, and educational disadvantages."

Although there has been a shift toward greater diversity at veterinary colleges in the past 10 years, the student population is still 71.1 percent white.

However, Lisa Greenhill, EdD, senior director of institutional research and diversity at AAVMC, said, "diversity is an onion," with many layers, during an interview with JAVMA News.

She pointed to the number of applicants who identify as first-generation college students as one measure of diversity within the population. 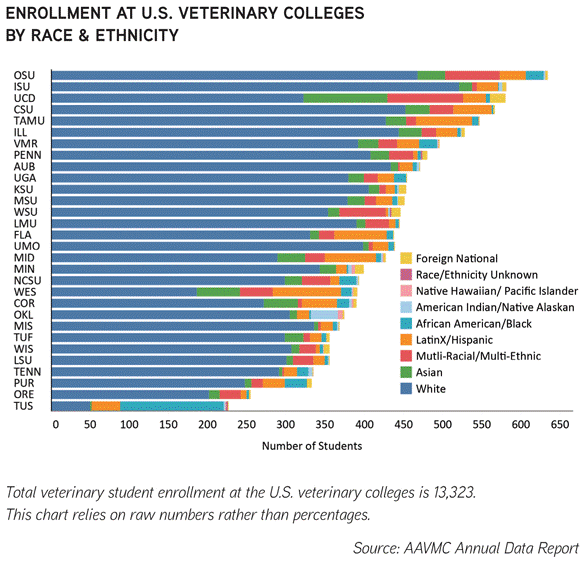 About 28.6 percent of applicants in 2019 were first-generation college students, according to the report. The percentage of applicants eligible for or receiving Pell Grants, which are awarded on the basis of financial need, was 27.2 percent.

"It is a different dimension of diversity," Dr. Greenhill said. "If we are talking about more visible diversity attributes, it is noticeably lacking. But when we start to peel back some of these other areas, it is there. It is still low numbers, but you start seeing a bit more of a complicated picture."

The Comparative Data Report project and surveys from AAVMC member institutions are used to create the report.

The Association of American Veterinary Medical Colleges' 2018-19 Annual Data Report can be found at the AAVMC website.

Dialogue about diversity reveals tensions (May 01, 2013)

Study on campus climate at veterinary schools in the works (Aug. 01, 2010)