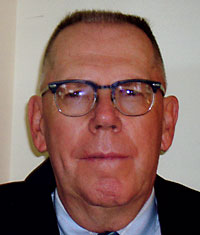 MANHATTAN, KAN.: Dr. Roger Fedde, Ionia, Kan., has been chosen to receive a Distinguished Service Award from the College of Veterinary Medicine and its Veterinary Medical Alumni Association.

The award will be presented Sunday, June 7, as part of the Heritage Evening banquet at the 71st Annual Conference for Veterinarians at K-State.

Dr. Fedde, an emeritus professor in the veterinary college, is being recognized for educating more than 3,000 veterinary students in physiology, mentoring students, advising graduate students and serving on numerous committees for the college and university. He taught at K-State from 1964 to 1998 and pursued research in respiratory physiology, control of respiration, avian physiology and exercise physiology.

“The College of Veterinary Medicine at Kansas State means a great deal to me because of the great faculty and staff colleagues, great students and great administrative support,” Dr. Fedde said. “I really appreciated the opportunity to work in an atmosphere that was supportive of my research and teaching interests and hope that my contributions have made a difference in the lives of students and the scientific community.”

Dr. Ralph Richardson, dean of the K-State College of Veterinary Medicine, said, “Dr. Fedde is highly respected in our college and continues to take an active interest in our activities and endeavors. He was awarded many times during his career for teaching and research, but we feel that his continued support of the college after retirement deserves special recognition and acclaim. We take great pride in presenting him our Distinguished Service Award.”

Dr. Fedde earned his bachelor’s degree in agriculture-animal science from K-State in 1957, and his master’s degree poultry science-nutrition and doctorate in poultry science-physiology from the University of Minnesota in 1959 and 1963, respectively. He received the National Science Foundation Cooperative Graduate Fellowship in 1959, Poultry Science Association Research Award in 1964, U.S. Senior Scientist Award from the Alexander von Humboldt-Siftung, Bonn, Germany in 1973, Distinguished Graduate Faculty Recognition from K-State in 1973, Carl Norden Distinguished Teaching Award from the veterinary college in 1975 and 1981, K-State veterinary Faculty Research Awards in 1970 and 1979, Senior International Fellowship from the Fogarty International Center in 1984, Robert O. Anderson Scholarship Award from the Lovelace Medical Foundation in 1991, and the Smith Kline Beecham Award for Research Excellence in 1994.

Dr. Fedde is a member of Alpha Zeta, Gamma Sigma Delta, Phi Kappa Phi, Gamma Alpha, Sigma Xi, Phi Zeta (honorary member), American Society of Veterinary Physiologists and Pharmacologists, Poultry Science Association, American Association for the Advancement of Science, Kansas Academy of Science, American Physiological Society and Comparative Respiratory Society. Outside of K-State, Dr. Fedde has been president of the American Heart Association’s Kansas Affiliate and is a member of the Jewell County Historical Society. He recently co-authored a book on the history of the schools in Ionia Township in Jewell County and is nearing completion on two more volumes.

He is married to Arrilla (Delp) Fedde and has three children: Cynthia Fedde Wunderle, Leslie Fedde and Bruce Fedde.