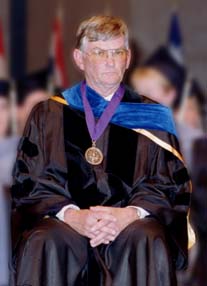 Dr. Edward L. Gillette, a 1956 graduate from the College of Veterinary Medicine at Kansas State University and native of Coffeyville, Kansas, was presented the Alumni Medallion Award during the commencement ceremony on May 14, 1999. We believe Dr. Gillette very deserving to receive the highest honor given to K-State graduates by the university.

Dr. Gillette has an international reputation for pioneering comparative cancer and radiation therapy research. His research in animal cancer at CSU has had an equal impact on the study of human cancer. Much of his work since the 1960s has been directed toward providing cancer research information to the medical profession.

He formed the comparative cancer research program in at Colorado State University in 1974 and has directed the program since. The National Cancer Institute and the American Cancer Society have invested more that $25 million in his research. He has had more than 100 scientific publications from his work, and he guided the work of 25 doctoral candidates in the program.

His international reputation in the study of radiation on tissues led to his travel to Russia, Japan, England, Germany and Switzerland as a consultant.

Dr. Gillette has been a visiting scientist at the M. D. Anderson Cancer Center at the University of Texas, president of both the American College of Veterinary Radiology and the Veterinary Cancer Society. He was also voted into the National academies of Practice, a parallel organization to the National Academy of Sciences.

He joined the faculty of CSU in 1959 where he advanced in academic rank and served nearly 10 years as chairman of the Department of Radiological Health Sciences in the College of Veterinary Medicine and Biomedical Sciences. In 1997-1998 he was the college’s associate dean of research.

Alumni Medallion Award
Presented and chosen by the Kansas State University and its Alumni Association, the Alumni Medallion Award was first presented in 1969. This award was established to recognize a citee of Kansas State University and its Alumni Association whose service and achievements added measurably to the quality of life. The recipients of this award are considered for their humanitarian service to society rather than material success alone. Only living alumni are eligible.

Nominations for the Medallion may be made by anyone. For further information and on how to nominate an alumnus of your choice, call (800) 600-ALUM (2586).