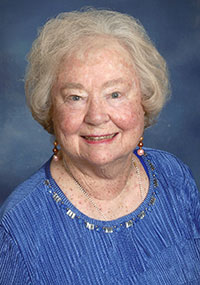 Dr. Jane Westfall, Manhattan, Kansas, has been selected for the 2017 Distinguished Service Award by the Kansas State University College of Veterinary Medicine and its Veterinary Medical Alumni Association. This award is to be presented during the Alumni Awards Brunch at the 79th Annual Conference for Veterinarians on June 4.

“When I came to Kansas State University in 1967, there were only two women and 70 men in the class,” Dr. Westfall said. “I have enjoyed seeing the rise of women in the veterinary field. I wish all veterinary students to have equality and diversity in life and fulfillment with the animals they treat.”

“We appreciate Dr. Westfall’s many years of service on the faculty with the College of Veterinary Medicine,” said Dr. Tammy Beckham, dean of the veterinary college. “Nearly 20 years after retiring, she continues to be involved in our college by attending seminars and lectures, as well as other functions. She has been a mentor to so many students that we are proud to recognize Dr. Westfall with this award.”

Dr. Westfall was raised in Lafayette, California. Having received an undergraduate scholarship, she earned a bachelor’s degree with honors in zoology from the University of Pacific in 1950. Dr. Westfall held a teaching fellowship in biology while completing a master’s degree in zoology from Mills College in 1952.

Her first professional position was as a research assistant at the University of North Carolina at Chapel Hill. After a year, Dr. Westfall received a Fulbright scholarship to study Marine Biology at the Stazione Zoologica in Italy. She then began doctoral work at University of California at Berkeley in 1954, but took time off in 1957 to serve as a laboratory technician in the department of physiological chemistry and the department of zoology. She finished her doctorate at the University of California at Berkeley in 1965.

Dr. Westfall then came to Kansas State University as an assistant professor in the Department of Anatomy and Physiology in 1967. She was promoted to associate professor in 1970 and full professor in 1976. She retired in 1999, having served on the faculty for 32 years.

Dr. Westfall has also been an active member in the Manhattan community including the Briercliffe Homeowners Association, First Presbyterian Church as an elder, English Speaking Union, Ten Thirty Investment Club, Friends of McCain, Kansas State University Foundation board of trustees member and League of Women Voters.