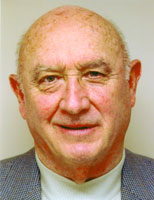 Dr. Wren is currently President of Wren Veterinary Consulting Service of Overland Park, Kansas. He started his career in the U.S. Army, serving two years as Captain and Post Veterinarian at Fort Jackson, South Carolina from 1958 to 1960. Coming back to K-State, he worked as Pathology Department Instructor for two years, earning a master's in Veterinary Pathology in 1962 before spending a year in private practice in Ottawa, Kansas. He then went to work for Armour-Baldwin Labs in Omaha, starting a long and distinguished career as a tech services veterinarian and veterinary pathologist.

Bruce returned to K-State in 1965 to again work as a Pathology Instructor and finish his PhD in Veterinary Pathology in 1968. He found his way north again to work as Chief of Tech Services for Dellen Labs in Omaha. In 1971 he started his own company, Wren Veterinary Pathology Service, which he operated in Omaha until 1977. From 1977 to 1981, he called the University of Nebraska-Lincoln home, serving as Veterinary Pathologist for the Veterinary Diagnostic Lab of the Veterinary Science Department. Dr. Wren then spent 18 years as tech sciences veterinarian for four national companies: Pioneer Hi-Bred in Des Moines, Iowa, Sanofi Animal Health in Overland Park, Kansas, Rhone Merieux Animal Health and Merial in Athens, Georgia. Coming home to Overland Park, Kansas, he has been owner of Wren Veterinary Consulting Service since 1999.