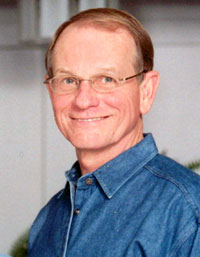 Manhattan, Kansas—The K-State College of Veterinary Medicine and Veterinary Medical Alumni Association will recognize Dr. Richard E. Webber, a 1965 K-State graduate, with a 2003 Alumni Recognition Award. The award will be given in recognition of his being an exemplary role model for future alumni in a professional and community setting. It will be presented at the K-State reception to be held in conjunction with the Central Veterinary Conference on August 25, 2003 at the Kansas City Downtown Marriott in Kansas City, Missouri.

Growing up on a farm in western Reno County Kansas, where his parents Earl and Elsie Webber still live, Richard helped with a Brown Swiss dairy herd, beef cattle, farm operations and was active in 4-H. He attended Pretty Prairie High School, lettered in three sports and was active in High School FFA in which he received a Star Farmer award. With these many veterinary medicine motivators, the one that tipped the scale for him was the local large animal veterinarian, Dr. Dan Upson, who greatly influenced his choosing veterinary medicine as a career.

At K-State, Richard was a member of the Alpha Zeta agricultural honorary, Delta Upsilon, and the Blue Key senior men's scholastic/activity honorary. He and his wife Marilyn were married June 6, 1964 and exactly a year later in 1965, they celebrated his graduation from veterinary medicine and an anniversary.

After graduation, a commission in the United States Air Force became the focus for Dr. Webber with duty stations at MacDill AFB in Tampa, Florida and Incirlik AFB, Adana, Turkey. After discharge from the Air Force in 1967, the couple moved to Kansas City where Dr. Webber worked metropolitan area practices until 1971, when he opened his own practice in Overland Park, the Fox Hill Veterinary Clinic. In 1976, Dr. Webber and 16 others were the charter organizers of the city's first Emergency Veterinary Service, the Emergency Clinic of Greater Kansas City. Dr. Debra Alexander (K-State '88), joined the Fox Hill Staff in 1997.

Richard and Marilyn live in Leawood, Kansas, and are the parents of three children: Steven Richard Webber, who lives in Florida, Haley Diane Webber Rafuse of Overland Park, Kansas and Megan Leigh Webber of Denver, Colorado.