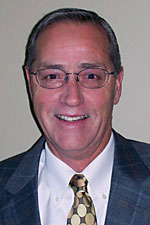 Dr. Terry L. Blanchard, College Station, Texas, is the 2010 Alumni Recognition Award recipient for the American Association of Equine Practitioners annual conference in Baltimore, Md., on Dec. 6. Dean Ralph Richardson presents this award on behalf of the Kansas State University Veterinary Medical Alumni Association in recognition for time and effort devoted to advancing veterinary medicine and for being an exemplary role model for future alumni in a professional and community setting.

“As an equine practitioner, the AAEP has been my routine annual continuing education meeting for many years,” Dr. Blanchard said. “Additionally Kansas State University has produced many active AAEP members over the years. Therefore, I consider it an honor to be recognized by my alma mater, Kansas State University, for this AAEP award.”

“We are very pleased to honor Dr. Blanchard with this award,” Dr. Richardson said. “His accomplishments as a practicing veterinarian and educator have been simply outstanding. He has established himself as a true expert in equine theriogenology, and he is someone we greatly admire as a role model for our profession.”

Dr. Blanchard has held several leadership roles throughout his career. While at Texas A&M University, he served as a professor of theriogenology and section chief in theriogenology. He has also been a member and secretary of the Examining Board for the American College of Theriogenologists.

In 2006, Dr. Blanchard was recognized as the Reproduction Specialist of the Year by the American College of Theriogenologists. This award recognizes outstanding achievements in the field of reproductive research and clinical theriogenology. He was awarded this honor while working as the resident veterinarian at the Hill ‘n’ Dale Farm.

Dr. Blanchard is married to Kathleen (Hale). He has four daughters: Shanna, Holly, Katie and Angela; and two sons: John and Michael.