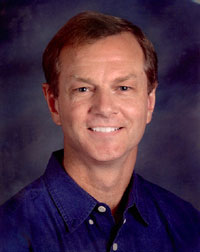 Recognized for his efforts in advancing veterinary medicine and for being an exemplary role model, Dr. John Teeter was honored as a 2001 Alumni Recognition Award Recipient at the CVC reception in August.

Dr. John H. Teeter was honored as a 2001 Alumni Recognition Award recipient during the K-State College of Veterinary Medicine Alumni Reception at the Central Veterinary Conference in Kansas City, Missouri. Dr. Richard Pursley, President of the K-State Veterinary Medical Alumni Association, presented Dr. Teeter with the award on August 25, 2001. The veterinarian was recognized for time and effort devoted to advancing the profession of veterinary medicine and for being an exemplary role model for future alumni of the College of Veterinary Medicine at Kansas State University. Dr. Teeter grew up in Hutchinson, Kansas and earned a bachelor's degree in 1977 and a doctorate of veterinary medicine in 1981 from Kansas State University. He has been practicing at Nall Hills Animal Hospital in Overland Park, Kansas since 1983.

Dr. Teeter has devoted a tremendous amount of time and energy to helping young people pursue their interests. As a participant in the Shawnee Mission Shadow Student Program and the Meet the Mentor Program, he has served as a role model to many young people interested in the sciences and veterinary medicine. He enjoys introducing aspiring veterinarians to the field by employing local high school students at his practice. Dr. Teeter has also been actively involved with the Boy Scouts of America for many years, both as a Cub Master and, currently, as a Scout Master. He received the National Scout Master Award in 1999.

For the past five years Dr. Teeter has participated in a foreign exchange program with a veterinary college in Germany. Typically, two German senior veterinary students live in his home with his family for three months. During this time, the students intern at his animal hospital, and they also have the opportunity to visit and work in a specialty clinic and at the College of Veterinary Medicine at K-State.

Throughout the years, Dr. Teeter has remained involved with his alma mater. He has been a board member of Pet Trust, a memorial fund for companion animals, since the board's inception in the early 1990s. He also served a four-year term on the Dean's Advisory Committee for the College of Veterinary Medicine.