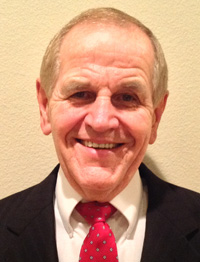 Dr. Leonard A. Sigdestad, San Bernardino, Californa, is the recipient of the 2014 Alumni Recognition Award for the winter meeting of the Western Veterinary Conference being held in Las Vegas on Feb. 17. This award is in recognition for the time and effort devoted to advancing veterinary medicine and for being an exemplary role model for future alumni in a professional and community setting.

Dr. Leonard Sigdestad was born in Webster, S.D. where he grew up on a farm. He had a love for animals at an early age. During his youth he was very active in 4-H and FAA. He was a state FAA officer and was awarded the American Farmer Degree. He did his undergraduate work at South Dakota State University and received his Doctorate in Veterinary Medicine at Kansas State University in 1967. He was inducted into Alpha Zeta, an honorary agriculture and veterinary medicine fraternity. Upon graduation he became an associate at Aberdeen Veterinary Hospital in Aberdeen, S.D. In 1968, he purchased the Loma Linda Animal Hospital where he practices today.

“Receiving this recognition is not very much about me, but about those who encouraged me and inspired me,” Dr. Sigdestad said. “My parents, my family, my high school ag teacher, our local veterinarians (Dr. Calay and Dr. Frey), my colleagues and all the great professors at K-States were great role models for me.”

“We are very proud to recognize Dr. Sigdestad with this award,” said Dr. Ralph C. Richardson, dean of the College of Veterinary Medicine. “He is the epitome of a dedicated practitioner and he has shown a great commitment for the profession and veterinary education. In his 45 years of practice in California, he has also been a great supporter and ambassador for Kansas State University.”

Dr. Sigdestad has served as director of Toro Pacific and Irrigation, Market Place Ministry, Regional Occupational Center and as an adviser to Colton Vocational School. Dr. Sigdestad has a passion for guide dogs. He has sponsored puppies and is providing Veterinary Service for Guide Dogs at a reduced fee. He currently serves on the Board of Directors for Guide Dogs of the Desert. In 2011, he was chosen as one of the top Chamber of Commerce business awards in the 63rd Assembly District of California.