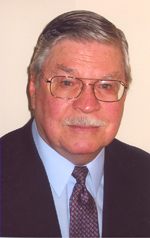 Dr. Dale F. Schwindaman, Rockville, Md., has been selected by the Kansas State University College of Veterinary Medicine and its Veterinary Medical Alumni Association to receive a 2007 Alumni Recognition Award. The award is in recognition for time and effort devoted to advancing veterinary medicine and for being an exemplary role model for future alumni in a professional and community setting.

Dr. Schwindaman retired in November 1996 after a 40-year career with the United States Department of Agriculture in regulatory veterinary medicine with the Animal and Plant Health Inspection Service (APHIS), formerly the Bureau of Animal Industry.

“It is a joy and a very special honor for my professional work to be recognized by the Kansas State College of Veterinary Medicine Alumni Association,” Dr. Schwindaman said. “As the years pass, I find more time to reflect with growing appreciation on the people and institutions in my native state of Kansas who made it possible for a farm boy like me to go to Manhattan, work my way through college and graduate from K-State in veterinary medicine. The professors and colleagues who set such a high standard of excellence for me have made a profound difference in my life. It is very gratifying to have my efforts serve as examples and be recognized as making a contribution to our profession and to the state and country we all love.”

“We take great pride in recognizing Dr. Schwindaman’s professional successes and personal accomplishments,” Dean Richardson said. “Dr. Schwindaman has had a tremendous influence and impact in our profession at a national level. His career demonstrates some of the unique opportunities that are available with an education in veterinary medicine and the ways in which our graduates can follow that example and serve the greater good of our country.”

After graduating from K-State with both a bachelor’s degree in science and a DVM in 1953, Dr. Schwindaman worked for a private practice in Wisconsin. He then served in the Air Force for two years. When he was discharged, Dr. Schwindaman accepted a position as a Field Veterinarian with the state of Minnesota, where initial intensive bovine brucellosis and tuberculosis eradications programs were under way.

In 1957, Dr. Schwindaman was hired by the USDA and held progressive field positions in Michigan, Illinois, New Jersey and Delaware, where he was the State’s Federal Veterinarian-in-Charge. From 1964-1965, Dr. Schwindaman engaged in post-graduate work at the University of Delaware, Newark. In 1966, he moved into Washington to begin work as part of the newly formed Animal Care staff, where he assisted in writing the initial regulations and standards for the first federal legislation dealing with the humane care and use of animals in research. For several years, he continued in this area as subsequent amendments in 1970, 1975 and 1985 expanded federal regulation of animal welfare to cover other species and uses in exhibitions, wholesale pet trade and in the transportation of animals. The Horse Protection Act of 1970 and the amendments of 1978 also became part of his staff responsibilities.

In 1985, Dr. Schwindaman transferred to a different section within APHIS to head the Technical Assessment staff. In that role, he organized and directed a task force to develop goals and infrastructure for the National Animal Health Monitoring System. He also developed plans for the proposed expansion of the Animal Care unit, designing the infrastructure of field offices and recruiting veterinary and technical personnel to implement the first field force dedicated specifically to animal care responsibilities. In 1988, he became Assistant Deputy Administrator of this new Animal Care Division. In 1989, as a member of the Senior Executive Service, he was reassigned to Veterinary Services as Western Regional Director, stationed in Denver and responsible for animal disease eradication and other regulatory activities for 12 states. He returned to Washington in 1992 as APHIS Deputy Administrator for Regulatory Enforcement and Animal Care where he remained until retiring in 1996.

Dr. Schwindaman has written numerous articles in scientific and trade journals, and chapters in two books. Since retiring, he has been a consultant in regulatory veterinary medicine to private business and research enterprises and serves on the advisory board of the Scientists Center for Animal Welfare. He is a lifetime member of the U.S. Animal Health Association, as well as a member of both the American Veterinary Medical Association and the Animal Welfare Institute. Dr. Schwindaman served two years as the president of the National Association of Federal Veterinarians.

In 1978, Dr. Schwindaman won the Superior Service Award from the Secretary of Agriculture in recognition of the implementation of the Animal Welfare Act and its amendments. He was recognized in 1994 by the American Society of Laboratory Animal Practitioners for exemplary support to the Inaugural Laboratory Animal Medicine Preceptorship Program. Dr. Schwindaman won the 1996 Harry C. Rowsell Award from the Scientists Center for Animal Welfare for major contributions to fostering the dual goals of good science and the humane care of animals.