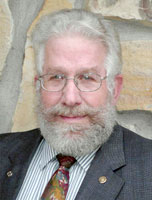 Dr. Norman R. Schneider of Ceresco, Nebraska received a 2004 Kansas State University College of Veterinary Medicine Alumni Recognition Award. The award is in grateful recognition for time and effort devoted to advancing veterinary medicine and for being an exemplary role model for future alumni in a professional and community setting. The award was presented at the Annual Meeting of the Nebraska Veterinary Medical Association (NVMA), during the banquet on Friday, January 16, 2004 at the Embassy Suites Lincoln, Lincoln, NE.

Growing up on a cattle ranch and wheat farm near Dorrence, KS, Dr. Schneider graduated from K-State College of Veterinary Medicine in 1968. For the next eleven years Dr. Schneider served the United States Air Force, (USAF) as a Base Veterinarian, Institute of Technology Fellow (post-doctoral program leading to MSc degree in toxicology), Veterinary Scientist/Toxicologist and Veterinary Toxicologist. His career with the USAF took Dr. Schneider to many different locations including: Goose Air Base, Labrador, Canada; Columbus, Ohio; Bethesda, Maryland; and Wright Patterson Air Force Base, Dayton, Ohio. A decorated member of the USAF, Dr. Schneider has been honored with the following awards: a Meritorious Service Medal, a Joint Services Commendation Medal, an Air Force Commendation Medal, and a Distinguished Service Award, Nebraska National Guard Association. Dr. Schneider retired from the USAF Reserves in 1995, as a Lt. Col. with thirty years commissioned service, the last sixteen of those with the Nebraska Air National Guard as Chief of Public Health.

In 1979, Dr. Schneider accepted a position with the University of Nebraska--Lincoln (UNL) as a Veterinary Toxicologist in the Department of Veterinary and Biomedical Sciences. In 1982, Dr. Schneider was also granted a courtesy faculty appointment to the Department of Pharmacodynamics and Toxicology/Pharmaceutical Sciences, College of Pharmacy, at University of Nebraska Medical College (UNMC). Dr. Schneider received Graduate Faculty Member status in 1980 as well as Graduate Faculty Fellow in 1987. Although Dr. Schneider retired from full-time status in December of 2002 with Emeritus he continues to teach three classes at UNL this semester.

While at UNL, Dr. Schneider developed, coordinated and implemented two new approved majors in the College of Agricultural Sciences and Natural Resources: Veterinary Science (VBMS) and Veterinary Technologist (VETT). He developed and taught VBMS 410 (General Pharmacology and Toxicology), one of the few such courses for undergraduates in the United States, developed and taught VBMS 101 (Intro to Animal Health) and recitations of AGRI/NRES 103 (Intro to Agriculture and Natural Resource Systems). In addition to teaching, from 1990 until retirement, Dr. Schneider served as sole Academic Adviser for 250 undergraduate students or more per academic year with majors in VBMS, VETT, and Preveterinary Medicine Program (PVET). He also implemented, partially funded, and directed the Preveterinary Advising Center in the Department of Veterinary and Biomedical Sciences. Dr. Schneider also coordinated and initiated the University of Nebraska – Lincoln Chapter of Veterinary Scholars Early Admission Program at Kansas State University College of Veterinary Medicine.

Throughout his career, Dr. Schneider has been involved in numerous professional and civic organizations. He has held memberships in the AVMA, KVMA, NVMA, AAVLD, and NACTA. Dr. Schneider is a Diplomat of the American Board of Veterinary Toxicology and has served as President and on the Council of Regents of that organization. He has been a Veterinary Profession Representative for the Nebraska State Board of Health, and an Advisor/Consultant for the Nebraska Master Poison Control Center. Dr. Schneider is also a Fellow in the American Academy of Veterinary and Comp Toxicology as well as having served as councilor in 1977-78, and 1987-90. Dr. Schneider is a member of the following honorary societies: Fraternity of Alpha Zeta (Agricultural), Society of Phi Zeta (Veterinary Medical Fraternity), Alpha Phi Omega (national Service Fraternity, Life Member), Gamma Sigma Delta (Agriculture), Omicron Delta Kappa (National Leadership), and Phi Beta Delta (International Scholars).

Dr. Schneider met his wife, Karen Marjorie (Nelson) Schneider during the summer of 1967, between his junior and senior year in veterinary school. Dr. Schneider had just started an internship for Drs. J.D. Little and Harold Hedlund, owners of the Green Acre Animal Clinic in Wahoo, NE. It was on an evening call with Dr. J.D. Little, to investigate a suspected lightning-struck cow that Dr. Schneider met his future wife: "We pulled off the highway onto a minimum-maintenance road and roared over the crest of a hill only to nearly have a girl riding her horse as a hood ornament." After the near miss, J.D. asked Norman, "Hey Doc, you want to meet a good-lookin' blonde?" Dr. Schneider nodded and was then introduced to his future wife Karen, who repeatedly reminds him that he was on the telephone back in Wahoo, calling to ask for a date before she could ride the ¾ mile back to her home and put her horse in the barn. The couple was married on July 1, 1968, a month after he received his DVM and a week prior to when he reported for USAF active duty at Sheppard AFB, Wichita Falls, TX.

Dr. Schneider and Karen have one son, Nelson R Schneider, who was born on August 1, 1979, one month after Dr. Schneider started at UNL. Nelson is an Eagle Scout with 13 Palms, and Explorer Gold Award recipient, and an accomplished musician (alto and soprano saxophone). He received a Bachelor of Arts degree from UNL in May 2002, graduating with Honors, having dual majors in English and Classics and triple minors in Music, Medieval and Renaissance Studies and Religious Studies. He was recognized by membership in a number of honorary societies including Omicron Delta Kappa, Sigma Tau Delta, and Phi Beta Delta. He is currently pursuing a Master of Arts degree with a Classics major, and was selected as the Graduate Research Assistant to the Chair of the UNL Classics Department for the 2003-04 academic year.

Dr. Schneider fondly recalls the summer of 1966 when he worked in Dykstra Veterinary Hospital at K-State as one of four resident interns who stayed in the sleeping quarters and were responsible for night emergency duty. The most memorable incident occurred on a Saturday afternoon when the Hospital was closed. Dr. Schneider and his classmate and roommate, Mike Gangel (KSU 1968) were on cleaning duty when Mike left to answer the after-hours door buzzer. When Dr. Schneider heard his footsteps coming back down the hall, he lit a firecracker that he had in his pocket and flipped it out in front of Mike just to see his reaction. Little did he know that a client was with Mike . . . a personal friend of Dr. Jake Mosier. Mike told Dr. Schneider later that they both jumped straight in the air and clapped their hands over their ears when they saw the sizzling fuse cutting arcs across the tile floor toward them. After the blast, the client repeatedly exclaimed, "I'm not gonna tell Jake! I'm not gonna tell Jake!"

Today, Dr. Schneider jokes about the incident with an appreciation for the client's good sense of humor: "Bless his understanding soul. He probably kept me in veterinary school. I hope there's no way I can have my DVM recalled after 35 years. That should be beyond the statute of limitations."