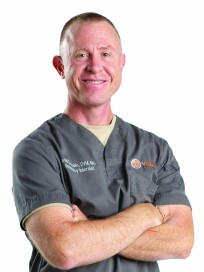 Dr. David S. Rolfe, Dallas, is the recipient of the 2012 Alumni Recognition Award presented at the annual convention of the American Veterinary Medical Association held Aug. 6 in San Diego. The award is given to veterinarians whose career has served as an exemplary role model for future alumni in a professional and community setting.

Dr. Rolfe earned his DVM from K-State in 1986 and a master’s degree in veterinary clinical science from Colorado State University in 1994. He also completed a residency in internal medicine at Colorado State in 1994 and achieved board certification in Small Animal Internal Medicine in 1995. He also holds a master’s degree in strategic studies from the U.S. Army War College in Carlisle Barracks, Penn. After graduating from K-State, Dr. Rolfe joined the U.S. Army Veterinary Corps. He has had tours to a variety of locations including: California, Germany, Colorado, Korea, Hawaii and Texas.

“I have been blessed in life with a wonderful, loving wife and family and friends; a wide diversity of enriching travel and life experiences; and a very rewarding profession and career,” Dr. Rolfe said. “My training at K-State, as well as the teachers and friends who carried me through it, ensured whatever success I have had by developing in me the foundations of critical thinking, problem solving, and determination.”

“Through this award we honor an outstanding K-State veterinary alumnus who has truly had a global impact throughout his military career,” said Dr. Ralph Richardson, dean of the College of Veterinary Medicine. “Dr. Rolfe served with great distinction in the wide variety of roles that animal health plays within the Veterinary Corps. By continuing to practice veterinary medicine past military retirement, he inspires us with his great dedication to the veterinary profession.”

In 2003, Dr. Rolfe served as the director of the Department of Defense Military Working Dog Veterinary Service. Two years later, he became the chief of the Department of Veterinary Science at the Army Medical Department Center and School, where they train all DOD veterinary career fields including: veterinarians, warrant officers, animal care specialists and veterinary food inspectors. In 2003, Dr. Rolfe became the Consultant to the Army Surgeon General for Veterinary Clinical Medicine for the next seven years. In 2007, he served as the Commander of the U.S. Army Veterinary Command, providing full-spectrum veterinary support to the DOD. After nearly 25 years of military service, Dr. Rolfe retired in 2011. He is currently the chief operations officer and senior internist for Veterinary Specialists of North Texas.

Dr. Rolfe is married to Brenda and they have six children; Laura, Lindsey, Eric, Levi, Ian and Lilianne.