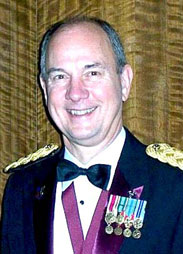 For the past 25 years Dr. Otte has been owner and president of State Line Animal Hospital in Leawood, Kansas. As an American Board of Veterinary Practitioners (AVBP) board certified specialist, he functions as a local referral veterinarian for medical, surgical and dental cases, supervising a staff of 14 employees in the diagnosis, treatment and care of all animals presented at State Line Animal Hospital.

In August of 1966, Dr. Vern Otte started his 36-year military career with a Direct Commission in the United States Army Reserve (USAR) as second lieutenant, attending the Army Medical Field Service School at Ft. Sam Houston in San Antonio. Early on, he held various USAR leadership positions, joining the Army Veterinary Corps after graduating with his DVM from Kansas State. His first Veterinary staff position was with the 302nd Civil Affairs Unit in Kearny, New Jersey. He has held many Veterinary Medical command and staff officer positions across the nation during his career. He was Staff officer in the 141st Medical Detachment in Columbia, Missouri and would later command this unit when it was activated for Desert Storm in 1991. He was the first Commander of the 445th Medical Detachment, a veterinary service unit in Kansas City, Missouri. His early guidance provided the basis for it to become one of the premier veterinary detachments in the service. Upon his retirement from the USAR in 2003, he was serving as Assistant Chief of the Veterinary Corps Mobilization and Reserve.

Dr. Otte and his wife, Brenda, live in Leawood, Kansas. He has two children Jodie and Brian. Dr. Otte has served as a docent for the Kansas City Zoo and is a past Advisory Board member for the Shawnee Mission School’s Vocational Education program.