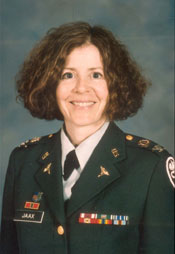 Dr. Jaax is currently the Special Projects Officer in the Office of Sponsored Research Programs at Kansas State University. During her previous military service career, she played a vital role in the military's veterinary pathology, diagnostic and research programs, managing multidisciplinary research programs in large biomedical laboratories; directing post graduate training programs for veterinarians in pathology and performing pathogenesis research with high hazard viral agents (primarily Ebola and Marburg virus), bacterial, biologic toxin and chemical agents. During this time she gained critical experience in laboratory animal pathology and research in the two highest levels of laboratory containment for infectious agents, BSL3 and BSL4 environments. During an appointment as consultant to the Army Surgeon General, she was the Department of Defense's principal expert in the pathology of high hazard hemorrahagic fevers, with particular expertise in the Marburg and Ebola viruses. She is a recognized international expert on emerging zoonotic disease issues, particularly in hemorrhagic fever viruses.

Serving as chief of the Pathology Division, United States Army Medical Research Institute of Infectious Diseases in Frederick, Maryland from 1989-2000, she managed the research activities of over 35 professionals and was mentor for veterinarians in post-graduate training in veterinary pathology. Prior to this, she served as Chief of the Pathophysiology Division, Aberdeen Proving Ground, Edgewood, Maryland, from 1987-1989, where she managed nearly 100 officers and civilian professionals in conducting and supporting research in the treatment of chemical warfare agents. Prior to becoming Chief of these sections in Ft. Detrick and Aberdeen, she worked as Comparative Pathology Officer and Chief of Comparative Pathology at Aberdeen and Ft. Detrick, respectively. Before taking Veterinary Pathologist Residency training at Ft. Detrick she worked as "Officer in Charge" of veterinary facilities at Ft. Leavenworth, Leavenworth, Kansas, the 64th Medical Detachment in Kaiserslautern, Germany and Ft. Lewis, in Washington State.

Since her graduation from K-State College of Veterinary Medicine in 1973, Dr. Jaax has authored and co-authored numerous journal articles and reports to the professional community on areas of study.

As Special Projects Officer at K-State, she has given over 100 presentations to health care professionals, medical schools and hospitals, along with Universities and Veterinary Associations. Her presentations deal with issues on emerging disease containment, management and responses, as well as the pathogenesis of Ebola virus and other hemorrhagic fever diseases.

Nancy and her husband, Jerry, who received his DVM from K-State's College of Veterinary Medicine in 1972, live in Randolph, Kansas. They have two children, Jaime and Jason.