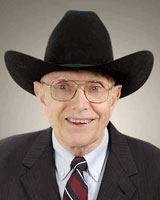 Dr. Robert Bruce "Bob" Miller of Columbia, Mo. will receive a 2004 Kansas State University College of Veterinary Medicine Alumni Recognition Award. The award is in grateful recognition for time and effort devoted to advancing veterinary medicine and for being an exemplary role model for future alumni in a professional and community setting. The award will be presented during the K-State Alumni Reception held in conjunction with the Western Veterinary Conference on Monday, February 17, 2003, at 7p.m., Mandalay Bay Hotel and Casino, Las Vegas, Nev.

Since his graduation from Kansas State University College of Veterinary Medicine in 1955, Dr. Robert B. Miller has been many things to many people. He has taken on the roles of husband, father, associate veterinarian, practice owner, researcher, teacher, and a giving member to the veterinary professional society. Throughout his fulfillment of all these roles, Dr. Miller has emerged as a leader in his field demonstrating dedication to veterinary medicine and continuing education.

Born in Eureka, KS, Dr. Miller, a self-proclaimed "Kansas farm boy," began the pursuit of his career in 1949 at Baker University, in Baldwin, KS After two years of study at Baker, he transferred to K-State where he would attain both his undergraduate degree in Pre-Veterinary Studies in 1951 and his doctorate in Veterinary Medicine in 1955. In addition to providing him with an education, K-State facilitated the meeting of Robert's future wife. Robert, an Acacia fraternity member, met Phyllis Ruthrauff, a Pi Beta Phi sorority member, who was pursuing degrees in Home Economics and Journalism. Phyllis, who also graduated K-State in 1955, was the editor of the Royal Purple Yearbook, and needless to say, Robert spent many a night studying in Kedzie Hall, the Journalism Building, keeping Phyllis company. The couple went on to marry in July of 1956.

Following his graduation in 1955, Dr. Miller began his own large animal practice in Eureka, Kan. After only a year, Dr. Miller moved to a mixed practice in Warrensburg, MO, where he worked as an employed veterinarian for Dr. Lyle Beebe (KSU DVM 1931) for one year before becoming co-owner in 1958 with Dr. John Price (KSU DVM 1951). Dr. Miller remained in Warrensburg until 1973 when he accepted the position of Research Associate at the University of Missouri, Columbia, in the Department of Veterinary Pathology. In 1976, Dr. Miller emerged from his studies having earned two advanced degrees: a MS in Veterinary Pathology as well as a PhD in Pathology. Dr. Miller was then promoted to Associate Professor in the Departments of Veterinary Medicine and Surgery and Veterinary Pathobiology at the University of Missouri, receiving tenure in 1980. Dr. Miller held these positions until 1999, when he retired from full-time status. He remains today at half-time employment.

During Dr. Miller's tenure at the University of Missouri, he taught hundreds of veterinary and pre-veterinary students and would spend up to 42 weeks a year guiding veterinary students in the Food Animal and Surgery Clinical rotation. While teaching in the clinical rotation he provided service to food animal clients both in the teaching hospital and as an ambulatory clinician. In addition to teaching, Dr. Miller also trained a number of food animal interns. Dr. Miller has served on literally hundreds of committees at the University of Missouri, concerning university, college, department, internship, residency, and graduate issues. He has an extensive list of research experience and published works, and has lectured throughout the nation and the world to both professional and non-professional audiences. With University of Missouri Outreach and Extension programs and several cattle industry-related organizations, Dr. Miller was instrumental in obtaining an interactive education program for Missouri cattle producers to facilitate value-added production by avoiding ante-mortem carcass damage via inappropriate management techniques. Since September of 1999, this display on Beef Quality Assurance has appeared at over 50 meetings and trade shows throughout Missouri.

Dr. Miller has been a leader, member or active participant in more than 15 professional organizations, including: District VII Director, 1969-72, American Association of Bovine Practitioners; president-elect, 1986, and president, 1988, American Board of Veterinary Practitioners; president, 2002-2003, Western Veterinary Conference; and Director, 1997 to present, Missouri Cattle Institute.

Drs. Bob and Phyllis Miller are the proud parents of two daughters and a son: Debbie Miller Clark, Karen Miller Pensiero, and Raymond Miller. Debbie graduated from the University of Missouri's School of Nursing, and lives in Anchorage, Ala. Ray earned degrees in Architectural Design and Architectural Engineering from K-State and has made Cairo, Egypt home, while Karen, a graduate of the University of Missouri School Of Journalism, resides in New Jersey. Robert and Phyllis also have three grandchildren; their oldest granddaughter is a junior at the University of Michigan while the others, a girl and a boy, are eight and three years old, respectively.

Dr. Miller looks back fondly at his years spent in Manhattan: "The many friends and acquaintances I made while attending K-State top my memories as they made my K-State experience special while in college and in the intervening years." Dr. Miller also notes the specific influence his education at K-State played in the outcome of his and his family's lives, remarking, "I am especially grateful to the then School of Veterinary Medicine and its faculty for giving me the opportunity to have a wonderfully successful career. Veterinary Medicine has allowed a Kansas farm boy to travel widely and to daily meet wonderful people from all walks of life. Kansas State has given Phyllis, Debbie, Ray, Karen, and me the ability and resources to succeed."