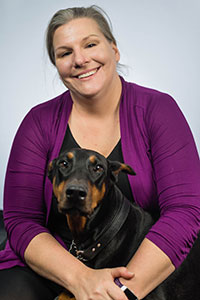 Dr. Molly McCue, St. Paul, Minnesota, has been selected by the Kansas State University College of Veterinary Medicine for its 2021 Alumni Recognition Award to be presented during a virtual reception in conjunction with the annual convention of the American Veterinary Medical Association (AVMA) being held online July 30. The award is given to veterinarians whose careers have served as exemplary role models for future alumni in a professional and community setting.

Dr. Molly McCue runs an equine-genetics laboratory and serves as the associate dean of research at the College of Veterinary Medicine at the University of Minnesota.

“It is an honor to be recognized by my alma mater for this award,” Dr. McCue said. “I have had a tremendous career in veterinary medicine thus far in large part due to the excellent education I received at K-State. Even though I also have a Ph.D. from the veterinary school at the University of Minnesota and have worked here for 17 years, the purple and Powercats in my office make it clear where my heart lies.”

“Dr. McCue is recognized as a global leader in equine genomics and computational biology,” said Dr. Bonnie Rush, dean of the Kansas State University College of Veterinary Medicine. “We were fortunate to have Dr. McCue present the keynote address during our annual Phi Zeta Research Day in March. She is a tremendous mentor and role-model of future veterinarians. We are proud to recognize her with this prestigious alumni award.”

As a kid growing up in Kansas, Dr. McCue loved to ride horses. She also knew at a young age that she wanted to be a veterinarian specializing in horses. But never did she anticipate spending 80 percent of her time writing grants and sitting in front of a computer.

In 2007, Dr. McCue moved to Minnesota to pursue doctoral and postdoctoral research, taking a position at the College of Veterinary Medicine as an assistant professor in 2008. Around that time, a consortium of people, including Dr. Jim Micklelson, professor in the Department of Veterinary and Biomedical Sciences, was working on sequencing the first horse genome—something McCue would go on to do hundreds of times. Along the way, she taught herself commuter programming.

She spent the next nine years, seeing patients, teaching veterinary students, and building her lab. In 2016, due to a combination of health issues and her rapidly expanding lab, McCue decided to focus almost entirely on research.

Dr. McCue has trained 16 PhD students, four MS students, and nine postdoctoral students, including computer scientists, computational biologists, geneticists, and veterinary scientists in comparative molecular biology, biosciences, and bioinformatics. Most of these students have joined Dr. McCue’s team after completing and DVM degree and some of them after residency training. All of them—including McCue—are experienced computer programmers.

In addition to better understanding disease in the horse, Dr. McCue’s research focuses on how the horse can be leveraged as a biomedical model. To do that, her lab spends about one-third of its time building the tools it needs to conduct what’s called network biology (understanding a cell’s functional organization), which can be applied across species. Recently, Dr. McCue has also branched into dog genetics. One of Dr. McCue’s most exciting new lines of investigation is adopting the statistical approaches developed to predict complex genetic diseases in horses to design genetic prediction assays for the likelihood of success of puppies destined to become service dogs based on their genetic profiles.

Dr. McCue’s broad scientific impact is the identification of a mutation for the most important heritable muscle disease in horses, which causes muscle cramping, pain, and exercise intolerance in more than 20 horse breeds. This finding resulted in a patent and established an LLC to provide the testing to the public. One of her findings was the first documentation of the “ancestral disease hypothesis” in any animal species and the resulting publication was awarded the 2015 Stephen J. O'Brien Award by the American Genetic Association. She has supported her overall research programs with more than $9.3 million in funding received from more than 80 competitive grants from federal, private and intramural sources.

In 2014, Dr. McCue was named one of six University of Minnesota Informatics Institute Transdisciplinary Faculty Fellows. She was awarded the 2017 Outstanding Graduate Mentoring & Teaching Award from the CVM. In 2019, Dr. McCue was nominated and chosen by her colleagues as the recipient of the Zoetis Award for Veterinary Research Excellence, the highest honor the college bestows on our research faculty. She has received the University of Minnesota Inventor Recognition Award three times. Dr. McCue is also one of the co-leads for equine and a former chair of the across species steering committee for the National Research Support Project, which is part of the U.S. Department of Agriculture’s National Genetics Resources Program, an honor that reflects her reputation in the animal genomics community. Dr. McCue has served as chair of the American College of Veterinary Internal Medicine’s education and research committee. She is the chair of the American Association of Veterinary Medical Colleges research committee where she has served on the research steering committee since 2020.

Dr. McCue likes to spend time in the outdoors with her husband and two children and with her son training their three dogs to compete in agility.