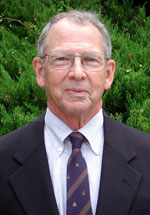 Dr. Thomas has been selected to receive a 2006 Alumni Recognition Award at the American Association of Equine Practitioners annual conference in San Antonio, Texas, on Dec. 4. Thomas has had rewarding career spanning 40 years in veterinary medicine and public health

Dr. Thomas received his Doctor of Veterinary Medicine from K-State in 1966. His fondest memories of his time at K-State are the people he met.

“As a southern California kid, I wasn’t used to the winters. But I met some great people,” Thomas said. “I had a wonderful set of classmates and we are all still pretty close.”

After graduation, Thomas joined the U.S. Air Force and was sent to Vietnam for a year. During his time overseas, he was chief of the veterinary service for the United States Air Force Dispensary at Nha Trang Air Base. “It was challenging in numerous ways, specifically in area of public health and zoonotic disease control.” Dr. Thomas said. “This sparked a fundamental change in my career choice.”

He spent three years at Sheppard Air Force Base, teaching administration, food establishment sanitation, food inspection and animal service to graduate veterinarians. He transferred to the United States Air Force Academy in Colorado in 1974 after obtaining a master’s of science in ecology, public health, and wildlife disease from Colorado State University. Dr. Thomas taught at the academy for three years before being promoted to Director of Veterinary Services and Falconry. He was responsible for general support duties and directed the falconry program, which included husbandry, captive breeding, training and raptor rehabilitation.

When K-State played the Air Force Academy in September 1978, Dr. Thomas brought the Falcons to the game. “K-State had no football team to speak of when I was in school,” he said. “K-State won that game and it’s the first time I can remember being at a game they won.”

Dr. Thomas left active duty in 1979 and returned to K-State to pursue a post graduate degree in epidemiology, higher education and continuing education. He also taught veterinary public health while at K-State.

In 1984, Dr. Thomas went to Texas A&M to teach epidemiology, food safety and regulatory medicine. After six years, he became employed at the United States Department of Agriculture, first as senior staff veterinarian for Equine Health Programs, APHIS, in Washington, DC, and then as a supervisor for the Food Safety and Inspection Service, Center for Learning in College Station. Working with the Food Safety and Inspection Service, he has trained meat and poultry personnel to perform food inspections to ensure public safety.

Dr. Thomas is very involved in professional organizations. He helped K-State obtain funding in 1990 to attend the American Association of Equine Practitioners’ annual conference. He is also a member of the American Veterinary Medical Association and is the co-chairman for its section on public health.

At the end of this year Dr. Thomas will retire from federal service, but hopes to continue to serve as a consultant in emergency preparedness

In his free time Dr. Thomas enjoys riding horses and competing in the select group for the American Quarter Horse Association. Select is designed for amateur exhibitors 50 years old and older