Honoring a Family’s Dedication and Passion for Animal Health Care 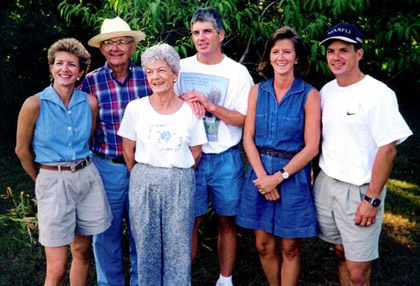 Dr. Elwyn A. Liebl and his wife Beatrice inspired three of their children to pursue a career in veterinary medicine. Drs. Barbara E. Wensel, Stephen A. Liebl, Thomas G. Liebl and their father received Alumni Recognition Awards at the K-State alumni reception held in conjunction with the Annual Meeting of the Kansas Veterinary Medical Association. The alumni reception took place Friday, January 11, 2002 in Topeka, Kansas. The veterinarians were recognized for time and effort devoted to advancing the profession of veterinary medicine and for being exemplary role models for future alumni of the College of Veterinary Medicine at Kansas State University.

Veterinary medicine was a "lifestyle" in the Liebl household. The kids helped their father clean kennels on Sunday mornings after church, they often tagged along with dad on farm calls, and the evening meal was often delayed waiting for dad to get home. Family vacations were usually scheduled around veterinary medical conventions.

Dr. Elwyn August "Gus" Liebl graduated from K-State with a bachelor's and doctor of veterinary medicine degree in 1951. Having served in the European Theatre of Operation during World War II, Gus co-owned a mixed animal practice in Dodge City, Kansas throughout his career, which spanned almost 50 years.

Gus married Beatrice Wald, originally from Kansas City, Missouri, in 1951 and the couple had four children, Barbara, Stephen, Thomas and Susan. The eldest three children followed in their father's footsteps by choosing to enter the veterinary profession. Their youngest daughter Susan (Dewell) attended K-State and St. Mary of the Plains College in Dodge City before becoming a busy mother of four in Meade, Kansas.

"I hadn't planned on three of my children becoming veterinarians, but I must have influenced them in some way by setting an example," Gus said. "We are a close family anyway, but I think this has brought us even closer together."

He also remains active in his community. He was a director of the Bank of the Southwest from 1980-1997. He serves on the board of Ford County Historical Society, Community Foundation and Dodge City Senior Center. He is actively involved with the Boy Scouts of America, having received the Silver Beaver Award from the Santa Fe Trail Council. He was awarded Pope John Paul II's Apostolic Blessing in 1999 in recognition for his 23 years of service as chairman of the Dodge City Diocese Catholic Committee on Scouting.

Perhaps his greatest accomplishment is his family. Having just celebrated their 50th wedding anniversary, he and Beatrice now boast nine grandchildren.

Dr. Barbara E. Wensel knew she wanted to be a veterinarian the first time she saw her dad deliver a calf.

"I knew it wouldn't be an easy job, because I saw all the hard work my dad put into his career but the rewards are great," Barbara said. "My parents never discouraged or encouraged me to be a veterinarian. They were supportive of whatever decision I made."

Barbara earned a bachelor's degree in 1975 and a doctor of veterinary medicine degree in 1977 from K-State. After briefly working in Kansas, the small animal practitioner has worked at Westlake Animal Hospital in Austin, Texas for the past 16 years. In addition to seeing patients, she is in charge of maintaining inventory and ordering pharmaceuticals.

"Both my parents instilled a mid-western good work ethic in me," Stephen said. "I remember my dad getting up at two o'clock in the morning to perform a cesarean section on a heifer. He never grumbled or complained; he just did it. My mom had just as much influence on us kids. She always made sure we worked hard and studied."

Dr. Tom G. Liebl has been an associate at Clinton Parkway Animal Hospital in Lawrence, Kansas since 1990. After briefly working as a horse jockey, he earned a bachelor's in 1983 and doctor of veterinary medicine degree in 1985 from K-State. After graduation, Tom completed an internship in small animal medicine and surgery and worked in Massachusetts. He later moved to California before returning to Kansas, achieving diplomate status by the American Board of Veterinary Practitioners in 1994. He is a member of the American Veterinary Medical Association, American Animal Hospital Association and Kansas Veterinary Medical Association, having served on the continuing education committee for the KVMA. He is currently serving as a board member of the Douglas County Board of Health. Tom and his wife Kim have three children: Brecken, Parker and McKenzie.

"The only push of encouragement I can remember is one time dad asked me if I had ever considered going into human medicine. Looking back, he was probably hoping to get one child to become an MD so that he would know his medical needs would be cared for," Tom jokes.

"It was Dad and Mom's quiet encouragement, through actions and example, that guided our decisions to follow in some very large footsteps."

The K-State College of Veterinary Medicine is proud to have such outstanding alumni represent our institution and the veterinary profession. Congratulations!