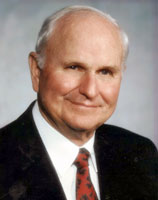 Dr. Harold N. Lange, a 2004 Alumni Recognition Award Recipient, has been surrounded by animals since childhood. As the fifth child born to a family of six children, Harold was born and raised on a farm in Crofton, Neb. After graduating high school, Harold remained in Crofton for five years to work on the family farm, taking time off to play professional baseball for a short time in 1950. In 1951, Harold left the family farm to serve in the Korean Conflict as a member of the Marine Corp. After two years of service, he returned to Nebraska and attended Wayne State College for two years, then enrolled at K-State where he graduated with his undergraduate degree in 1959, followed by his doctorate in veterinary medicine in 1961.

Following graduation, Dr. Lange became associated with the A&M Veterinary Clinic in Columbus, Neb. Dr. Lange has been a mixed practitioner for the last 42 years, and owner and director of the A&M Veterinary Clinic for the last 15 years. Dr. Lange has watched his clinic evolve over the years from primarily a food animal clinic to the majority of his business coming in the form of companion animal clients. He has noticed the enormous increase in the level of care people are giving their pets, recognizing what he refers to as the "human animal bond."

Dr. Lange and his wife, Marianne have two sons, Thomas and David. They also have five grandchildren. Mrs. Lange has been active in both the Nebraska Veterinary Medical Association (NVMA) Auxiliary and the Auxiliary to the American Veterinary Medical Association (AVMA) for many years. She served as auxiliary president, secretary and treasurer of the NVMA, as well as auxiliary president of the AVMA from 1993-1994. Harold and Marianne met when she was teaching in Harold's home town when he returned from military service. They met on a double date – but Marianne's roommate was with Harold! They soon rectified this mistake, and continued their relationship marrying on August 6, 1956.

In addition to Dr. Lange's veterinary work, he has been involved in numerous professional and civic organizations. As an extremely active member in the NVMA, Dr. Lange has held positions on the Board of Directors, as District IV Chairman, Secretary/Treasurer, and President in 1993. The AVMA has also played an important role in Dr. Lange's life as he has had almost thirty years of involvement, and has served on the Council of Veterinary Services, the Membership Services Committee, Executive Board (representing District VII) and as a Member of the House of Delegates. Some of Dr. Lange's other professional and civic involvement include: AAHA, AASP, AABP, AAVC, Elks Lodge, American Legion, Sertoma International Service Club, Alpha Zeta Honorary Agricultural Fraternity, Columbus Chamber of Commerce, 4-H Council, Boy Scout Counselor, YMCA Board of Directors, and the Columbus Public Schools Board of Education. Harold also serves as a Lector for the St. Isidore Church.

Dr. Lange was presented with a 2004 Alumni Recognition Award during the Annual Meeting of the NVMA, during the banquet on Friday, January 16, 2004 at the Embassy Suites Lincoln, Lincoln, Neb. The award is in grateful recognition for time and effort devoted to advancing veterinary medicine and for being an exemplary role model for future alumni in a professional and community setting.