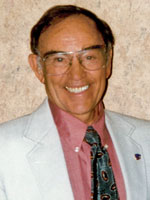 MANHATTAN -- Dr. Joseph E. Landholm, Sedona, Ariz., has been awarded a 2005 Alumni Recognition Award from the Kansas State University College of Veterinary Medicine. The award is in recognition for his time and effort devoted to advancing the profession of veterinary medicine and for being an exemplary role model for future alumni.

The award will be presented during the K-State alumni reception at the Western Veterinary Conference Feb. 21 in Las Vegas, Nev. Landholm obtained his Doctor of Veterinary Medicine degree from K-State in 1956.

Landholm has focused on natural therapeutics and acupuncture during his career. In the early 1970s an article in Veterinary Medicine magazine about the first seminars on veterinary acupuncture piqued Landholm's interest in alternative veterinary medicine. "I went as a skeptic, but I could see other individuals who had trained in Hong Kong were getting some results," he said. "So I developed an interest and continued to take the seminars."

In 1975 he was certified as a veterinary acupuncturist by the International Veterinary Acupuncture Society. He became a Natural Therapeutics Specialist in 1988 after taking additional training in massage, herbology and Shiatsu. Landholm retired from the Fairview Veterinary Clinic in Lexington, Neb., in 1986 to become self-employed in the practice of veterinary acupuncture, massage and natural remedies.

"I would suggest veterinary students be open-minded and aware that sometimes there's a better way to do something," Landholm advised.

Practicing traditional veterinary medicine is not something Landholm abandoned altogether; in fact, he combined alternative and traditional methods. He said he has gotten response to medical conditions that western medicine has no way of helping. "To just be able to salvage an animal that otherwise would be destined to be put down, is rewarding."

Retirement has been a fulfilling time for Landholm as well. He volunteers for the National Forest Service, and is the co-chair of the Trails Committee and member of the Verde Valley Archeological Society.

Landholm and his wife, Sonya, also serve as docents at two archeological sites in the Sedona area, and enjoy trips to various rock-art sites with friends. They also make time to visit their three children and nine grandchildren in Ohio, North Carolina and Washington State.