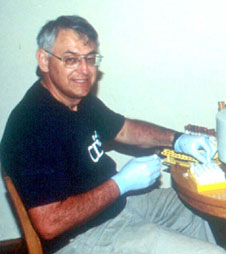 After graduation with his DVM from K-State in 1970, Dr. Ksiazek spent a year as Associate Veterinarian, at the Adirondack Animal Hospital in Glensfalls, New York. He started a 20-year military career when he joined the U. S. Air force in 1971, holding a position that year as Base Veterinarian at Sheppard Air Force Base, Texas. He then worked as Chief of Veterinary Services, Royal Air Force Chicksands, United Kingdom. Dr. Ksiazek made a change in his veterinary military career by attending the University of Wisconsin, in Madison, receiving a master’s degree in Virology and later the University of California, Berkeley, where he received a PhD in Epidemiology and Virology.

Dr. Ksiazek has worked as a Veterinary Microbiologist at virology research at stations around the world for the U.S. Navy, U.S. Air Force and then for the U.S. Army at the Disease Assessment Division, as at Ft. Detrick in Frederick, Maryland. He then served as Chief, Rapid Diagnosis Section, Department of Epidemiology, Disease Assessment Division, at Ft. Detrick.

Dr. Ksiazek and his wife Shirley live in Lilburn, Georgia and have a daughter, Sarah.