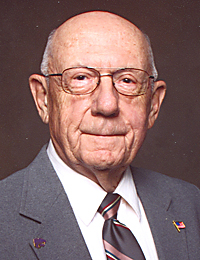 Dr. Kinyoun was born on a farm north of Formoso, Kan., on Dec 28, 1927. He attended country grade school then Lovewell Rural High School. In 1944, Dr. Kinyoun took a test that allowed juniors to apply for college at the end of their junior year. He was accepted and entered as a pre-veterinary student at K-State in fall 1944. The next year he was accepted to the veterinary program, and entered the College of Veterinary Medicine in the 1945-1946 freshman class.

Dr. Kinyoun interrupted his education in 1946 to serve two years as a corporal in the U.S. Marine Corps. He returned to complete his education in the fall of 1948 and earned his DVM degree at K-State in 1951.

Dr. Kinyoun joined with a classmate, Dr. R.W. McNabb, and purchased a practice in Superior, Neb. They formed a professional corporation, built an animal hospital designed with pens and chutes, which allowed farmers to haul in large animals to be treated and/or processed. The hospital included surgical and treatment facilities for companion animals, and grooming and boarding services. At the time, this was a rather new concept. Dr. Michael Moore joined the practice after serving in the Army Veterinary Corps from 1968-1970. Dr. McNabb sold his interest to Dr. Moore and Dr. Kinyoun in 1978, and the two partners were joined by Dr. Kenneth Thompson.

After 39 years in Superior, in 1990, Dr. Kinyoun sold his veterinary practice to his partners and began working for the USDA Food Safety and Inspection Service. He retired on March 1, 1995, but still spends his summer months doing relief work for the USDA-FSIS. He is proud of the fact that the animal hospital he had designed and built in 1954 is still there and has become a landmark in the community.

“My best years in life are those spent in veterinary medicine and I’m very proud to be in this profession,” Dr. Kinyoun said. “It’s a significant honor to be recognized by my alma mater and peers, and I am grateful to K-State for having the opportunity to be where I am today”

“Dr. Kinyoun has been tireless throughout his career and is extremely devoted to his profession and to his classmates from K-State,” said Ralph Richardson, dean of the College of Veterinary Medicine. “The fact that he continued to work in food safety after retiring from his practice shows what great character and passion he has for improving the lives of animals and humans.”

Dr. Kinyoun was the Nebraska delegate to the AVMA from 1969-1972 and was president of the Nebraska Veterinary Medical Association in 1973. Dr. Kinyoun’s current professional memberships include: NVMA, AVMA and KVMA. He is also a member of the American Legion, BPO Elks and FO Eagles. Dr. Kinyoun served several years on the Superior Board of Education as well.

Dr. Kinyoun’s wife, Margaret (Cramer), graduated with her RN degree from the Mary Lanning School of Nursing, Creighton University, Omaha, Neb. The Kinyouns have six children: Joan, Jean, Joseph, Jeffrey, Judith, and Jane. They also have six grandsons and four granddaughters ranging from 18 years old to 33 years old, as well as two great-grandsons and one great-granddaughter.