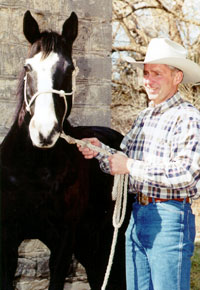 Dr. Justin Janssen was honored as a 2001 Alumni Recognition Award recipient during K-State's alumni reception at the Annual Meeting of the American Association of Equine Practitioners on November 25 in San Diego, Calif.

Dr. Justin B. Janssen was honored as a 2001 Alumni Recognition Award recipient during the K-State College of Veterinary Medicine Alumni Reception at the Annual Meeting of the American Association of Equine Practitioners on November 25 in San Diego, California K-State's Veterinary Medical Alumni Association sponsored the award. The veterinarian is being recognized for time and effort devoted to advancing the profession of veterinary medicine and for being an exemplary role model for future alumni of the College of Veterinary Medicine at Kansas State University.

Dr. Janssen grew up in the central Kansas town of Geneseo, and he earned two academic degrees from Kansas State University, a bachelor's degree in 1970 and a doctorate of veterinary medicine in 1972. After graduation, Dr. Janssen served two years in the United States Army Veterinary Corp. He then worked for an equine veterinary center in Westfield, Ind. before opening Janssen Veterinary Clinic in Sheridan, Indiana in 1977. While the four-veterinarian practice serves both large and small animal care needs, approximately 60% of the clinic's patients are horses.

Throughout his career, Dr. Janssen has remained involved in several national and regional equine organizations and served on many committees. Since joining the American Association of Equine Practitioners in 1973, he has attended 26 of the last 28 annual AAEP meetings, and he currently serves as the Ethics Forum Facilitator. He previously served on the Purchase Committee and Public Relations Committee, and partook in an Equine Event Ambulance/Education focus group.

Dr. Janssen has been recognized throughout the years for his service and dedication to the veterinary profession and the equine industry. He was named Honorary Indiana Commissioner of Agriculture in 1999, and he has also been named as an Indiana Friend of 4-H.

Dr. Janssen's greatest and proudest accomplishment is his family. Mary, his wife of 31 years, earned a bachelor's and master's degree in speech pathology from Kansas State University. His children are carrying on the K-State legacy. Ben is a 1999 graduate and Katie will graduate in 2002.