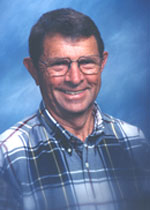 Dr. Glen E. Hurley, Waverly, Iowa, has been selected to receive a 2007 Alumni Recognition Award by the K-State College of Veterinary Medicine and its Veterinary Medical Alumni Association. He is being honored for his time and effort devoted to veterinary medicine and for being an exceptional role model for future veterinarians.

The award will be presented at the K-State Alumni Reception during the North American Veterinary Conference on Jan. 14, in Orlando, Fla.

Dr. Hurley earned his doctor of veterinary medicine degree from K-State in 1953.

After graduating he served two years as base veterinarian at Bowling Air Force Base in Washington, D.C.

In 1956 he went to work in a large animal veterinary practice with Dr. Lee Railsback in Ellsworth, Minnesota. A year later Dr. Hurley opened his own large animal practice in Boxholm, Iowa, where he worked until 1975. From 1975 until his retirement in 1991, he co-owned a veterinary practice in Waverly, Iowa, where he specialized in the treatment of dairy and beef cattle, swine and horses.

Since retirement, Dr. Hurley and his wife, Lois, have been involved in volunteer work around the world. The Hurleys completed a term in the United States Peace Corps, living in Morocco, where Dr. Hurley trained veterinary technicians and provided animal care. “Our term in the Peace Corps opened several doors for other opportunities,” Dr. Hurley said.

In 1995 the couple directed a goat restocking project for the Maasai tribe in Kenya. The next year they trained Peace Corps volunteers, native farmers and technicians in El Salvador. The Hurleys have also volunteered in Ghana, Mongolia, Jamaica, Puerto Rico, Guatemala, St. Vincent and Granada.

“Just becoming acquainted with the people around the world and helping them is a very rewarding experience,” Dr. Hurley said.

He has also been involved with Heifer International for over 35 years, an organization that supplies livestock to the poor in developing countries. The native people are taught how to care for the animals while preserving their environment. They also receive community organizational skills. Through Heifer International the Hurleys have volunteered at The Ranch in Arkansas and Overlook Farm in Massachusetts. They continue to do promotional work, seminars and displays for the organization.

The Hurleys have three children, Sharon, Shawn and Eric, and four grandchildren.