The recipients of the awards, Dr.Gregory S. Hammer and Dr. Martha L. O'Rourke, were recognized for time and effort devoted to advancing the profession of veterinary medicine and for being exemplary role models for future alumni of the College of Veterinary Medicine at Kansas State University.

Dr. Hammer grew up in Bonner Springs, Kansas and earned both a bachelor's and doctor of veterinary medicine degree from Kansas State University in 1971 and 1973, respectively. After graduation he served two years as a veterinary medical officer captain in the United States Air Force and was honored for his meritorious service in 1975. He is currently owner and partner of Brenford Animal Hospital, a seven- doctor small animal and equine practice, in Dover, Delaware.

He has been an active member of the American Veterinary Medical Association for the past 28 years. He served on the House of Delegates for the State of Delaware from 1986-1999. As a current executive board member, he is active in several committees including the long range planning committee, liaison to committee on human-animal bond and the constitution and bylaws committee. He was voted Delaware Veterinarian of the Year in 1997 by the association. Dr. Hammer served on the executive board of the Delaware Veterinary Medical Association from 1986-1999.

Dr. Hammer is also very active within his community. He is presently a member of the Dover Rotary Club and the Greater Dover Committee. He has served on the Bayhealth Medical Center Board since 1993. 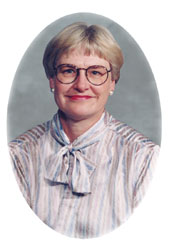 Originally from Hoisington, Kansas, Dr. O'Rourke earned both a bachelor's and doctor of veterinary medicine degree from Kansas State University in 1964 and 1966, respectively. After graduation Dr. O'Rourke moved to the East Coast to pursue a career in small animal medicine. She completed the Basic Science Course in Ophthalmology at New York University Post Graduate School of Medicine in 1970. She is currently owner and president of the Small Animal Veterinary Associates, P.A. in Toms River, N.J. She is board certified by the American Board of Veterinary Practitioners in companion animal medicine and was re-certified in 1990.