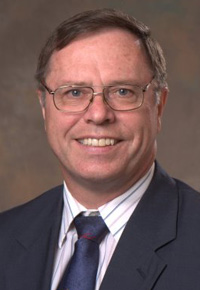 Dr. Michael J. Gilsdorf, Sykesville, Maryland, is the recipient of the 2015 Alumni Recognition Award presented during the annual convention of the American Veterinary Medical Association (AVMA) held in Boston on July 13.

Dr. Gilsdorf earned a bachelor’s degree in animal science in 1972 and a Doctor of Veterinary Medicine (DVM) degree in 1974, both from Kansas State University. In 1981, he completed the criteria and was awarded a Master’s in Veterinary Microbiology from Iowa State University. Dr. Gilsdorf wanted to gain experience in all aspects of regulatory medicine with the United States Department of Agriculture, Animal and Plant Health Inspection Service’s Veterinary Services. He has held positions over the last 33 years as a veterinary medical officer (VMO), an area veterinarian in charge (AVIC), a VMO at the National Veterinary Services Laboratory, a senior staff veterinarian in headquarters, and a VMO working in international animal health programs. He is currently executive vice president of the National Association of Federal Veterinarians in Washington, D.C. and is considered to be an expert on brucellosis, an infectious bacterial disease that has significant impact on cattle and swine.

“I am extremely honored and humbled by this recognition,” Dr. Gilsdorf said. “I intended to be an equine practitioner when I graduated. I quickly found that public practice was also very rewarding and important, so I remained to try and help the country eliminate major animal diseases and prevent the introduction of transboundary diseases. I feel veterinarians are the heart of public health because of the training we receive in our veterinary education.”

“Dr. Gilsdorf has shown a great commitment to public service and public health throughout his career,” said Dr. Ralph Richardson, dean of the College of Veterinary Medicine. “He is an excellent role model for young veterinarians who are interested in helping protect the nation’s food supply and guard against infectious zoonotic diseases. We are very proud to recognize him with this award and anticipate he will continue to make significant contributions to our profession in the future.”

Dr. Gilsdorf has been a member of the National Association of Federal Veterinarians since April 1983. He has served on the board of directors numerous times and was president in 1995-1996. Dr. Gilsdorf has been a member of the United States Animal Health Association since the mid-1980s. He has been active primarily in the brucellosis and tuberculosis committees and has delivered numerous annual reports and resolutions to these committees. In 2010, he was asked to serve as co-chair of the Diagnostic Laboratory and Veterinary Workforce Development Committee of the USAHA.

Dr. Gilsdorf and his wife, Linda, have four children and six grandchildren.