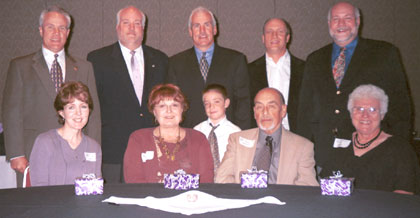 The first Bradley to become a veterinarian was William or "Bill", a Blue Mound, Kansas, native, who earned both a bachelor's degree and a DVM degree from K-State in 1953. Upon graduation, Bill married Beverly "Bev" Torrens, of Independence, Kansas, a '53 K-State home economics graduate. After a short stay in Missouri and a stint with the Air Force in Arkansas, they settled in Lawrence, Kansas, in 1957 where they opened a mixed practice, the Bradley Veterinary Hospital. In 1965, the practice achieved certification by the AAHA and later became exclusively focused on small animal care. Dr. Bill Bradley retired in 1988 after being very active in the AVMA, AAHA, and was also active within the KVMA serving as president of the association in 1981. He was a founding member of the Douglas County VMA, which is still active today. He passed away in January 2001.

Mrs. Bev Bradley was a Douglas County Commissioner for eight years and also served as President of the K-State Alumni Association from 1979 to 1981. She received the Distinguished Service Award from the K-State College of Human Ecology in 1980. The couple is known for hosting the KSU Alumni Picnic in Lawrence, "Jayhawk Land", for 21 years.

Dr. Wayne D. Bradley, Bill's younger brother, DVM, KSU '56, briefly practiced in Chicago, Illinois, in Lexington, Massachusetts, with the Air Force, in Kansas City, with the USDA and then opened Leawood Animal Hospital where he had a small animal practice for 29 years. In 1976, Wayne joined the faculty at K-State as a part-time assistant professor where he lectured junior and senior veterinary students about small animal medicine every week, splitting time with his private practice. During this time, he authored a chapter in the book Canine Medicine on the topic of liver functions. He also served as an area director for the AAHA and as a Director of the Missouri VMA for several years. The Kansas City VMA recognized him as Veterinarian of the Year for three years running. He was also active within the AVMA and KVMA. In 1988, he and his wife, Renea, retired to Wayzata, Minnesota., located on Lake Minnetonka.

Dr. Roger A. Bradley, the second son of Bill and Bev, has owned and operated PetCare Veterinary Hospital, a 24-hour emergency care veterinary hospital and pet supply store, in Santa Rosa, California since 1991. Roger graduated from K-State with a DVM degree in 1980. He was certified by the ACVIM after an internship at Animal Medical Center, NYC in 1981 and a residency at the University of California-Davis in 1983. The small animal specialist practiced as an internist and veterinary consultant in Santa Cruz, San Jose and Los Gatos, California, before opening his practice. He is active within the California VMA and the Redwood Empire VMA, for which he served as Vice-President in 1994.

Dr. John S. Bradley, the fourth son of Bill and Bev, currently owns and practices at Bradley Animal Hospital in Lawrence, Kansas. John earned his doctor of veterinary medicine degree from KSU in 1987 and a year later completed a University of Illinois internship before practicing in Virginia and California. He returned to Lawrence and purchased the Bradley Animal Hospital in 1991 and became board certified by the ACVP (canine/feline). John finds volunteer activities very rewarding, he has served the Douglas County VMA as Secretary/Treasurer, Vice President and President. He recently resigned as Chairman of the Pet Trust, a position he held in the pet memorial program’s board at K-State since 1992. He is an active member of the AVMA, KVMA and AAHA.

Mr. Philip B. Bradley, the middle son of Bill and Bev, a past K-Stater is currently Executive Director of the Kansas Licensed Beverage Association and consultant for the American Beverage Licensees in Washington, D.C. He resides in Lawrence.

Mr. William Bradley Jr., "Brad", the oldest son of Bill and Bev, also a past K-Stater earned a bachelor's and law degree from KU. He is currently Executive Vice-President and General Council for the National Information Consortium and resides in Overland Park, Kansas.

Dr. Kent R. Bradley, Bill and Bev's youngest son, a K-State graduate, earned a doctor of medicine degree from KU and is now a board certified OBGYN in private practice in Wichita. He also serves as a clinical assistant professor at University of Kansas School of Medicine -Wichita.