Manhattan -- Dr. Jack L. Anderson and Dr. Michael L. Whitehair, graduates of Kansas State University's College of Veterinary Medicine, received 2002 Alumni Recognition Awards. The awards, which are sponsored by K-State's Veterinary Medical Alumni Association, were given in thanks and acknowledgement of time and effort devoted to advancing the profession of veterinary medicine and for being exemplary role models for future alumni of the College of Veterinary Medicine at Kansas State University. The awards ceremony will took place Sunday, July 14, 2002 at the K-State alumni reception held in conjunction with the annual meeting of the American Veterinary Medical Association in Nashville, Tennessee. 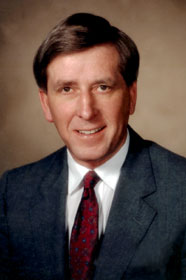 Dr. Anderson, a native of Sutton, Nebraska, earned a bachelor's degree in 1963 and a doctorate in veterinary medicine in 1965, both from K-State. He served two years in the U.S. Air Force Veterinary Corp following graduation. He practiced general veterinary medicine in Illinois from 1967 until 1978, when he returned to Nebraska. In 1980, he established a consultation practice specializing exclusively in swine medicine and business. He has owned and managed the Fremont Animal Medical Clinic since 1982 and the Grand Island Animal Medical Clinic since 1988. Both clinics specialize in companion animals.

Throughout the years, Dr. Anderson has remained active within his profession and community. In Illinois, he served as a District Chairman of the Northern Illinois Veterinary Medical Association. He was on the Board of Farmers and Merchants Bank in Sycamore, Illinois as well as the Building Committee of the Sycamore United Methodist Church. He joined the Nebraska Veterinary Medical Association in 1978 and has worked on various committees as well as serving as District Chairman. The NVMA awarded him the Distinguished Service Award in 1999. He served as a board member of the Nebraska Pork Expo from 1985-1994. He is a member of the Agri-Business Committee of the Columbus Chamber of Commerce. He previously taught a course in swine management on the Platte campus of Central Community College. Dr. Anderson has been a private pilot for 25 years and was elected to the Columbus Airport Authority. He is a member of the Columbus Federated Church as well as the Masonic Lodge, Scottish Rite and the Sesostris Shrine Temple.

He and his wife Patricia are actively involved with the veterinary profession in numerous ways. The couple sponsors an annual lectureship in swine production management at K-State. Patricia served as President of the AVMA Auxiliary from 1999-2000 and currently is a member of the Board of Directors of the American Veterinary Medical Foundation. 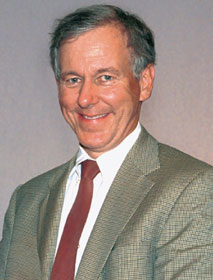 "Dr. Whitehair earned a bachelor's degree in 1972 and doctorate in veterinary medicine in 1974 from K-State. He briefly worked at a veterinary practice in Paola, Kansas before returning to his hometown of Abilene, Kansas. He joined Dr. Frank R. Jordan at the Abilene Animal Hospital in 1975, where he has continued to practice for more than 25 years. The clinic staff, which Dr. Whitehair co-owns with Dr. Steven Henry and Dr. Lisa Tokash, provides health care to all animal species. His professional interests include beef, feedlot and equine medicine. Dr. Whitehair provided consultative services for Rolling Hills Refuge Wildlife Conservation Center for more than 10 years.

The multi-species veterinarian is a longtime member of several professional and community organizations. Dr. Whitehair is currently serving as a State Delegate to the American Veterinary Medical Association and previously served on the House Advisory Committee. He was President of the Kansas Veterinary Medical Association in 1993 and Vice President two years prior. Other KVMA involvements include the Awards, Dean's Liaison, Legislative and Program Committees. In 1996, the KVMA named him Kansas Veterinarian of the Year. Dr. Whitehair served as President of the Academy of Veterinary Consultants from 1998-1999 and previously served on the Board of Directors. He is also a member of the American Association of Bovine Practitioners.

His numerous community involvements include the Abilene School District, Abilene Rotary Club, 4-H and Dickinson County Extension Council. The Abilene Chamber of Commerce recognized him as Citizen of the Year in 1996.