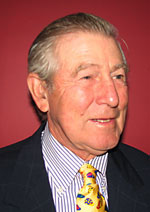 Dr. Umphenour is the resident veterinarian for Ashford Stud, a division of Coolmore America, with divisions in Ireland and Australia. Ashford Stud breeds and trains champion race horses. Dr. Umphenour earned a bachelor’s degree in veterinary medicine in 1960 and a DVM in 1962, both at K-State. He was born in Girard, Kan.

“It’s been a great ride,” Dr. Umphenour said. “I’m proud to be a K-Stater as we set the standard for the veterinary profession. I’ve conducted my career by following many of the things I learned while I was a student at K-State — study hard, keep it simple, don’t go against Mother Nature and make the right diagnosis before you make the decision to treat.”

“Dr. Umphenour is an outstanding and highly respected equine reproduction expert in the heart of Kentucky Thoroughbred farms,” said Ralph Richardson, dean of the College of Veterinary Medicine. “His opinions and expertise have been sought out by many of the top breeders and trainers. His success speaks well for the quality impact of veterinary education provided at K-State and its far-reaching impact in a field where the highest quality animal care is a must.”

Dr. Umphenour served in the Air Force for two years after graduating from K-State. Afterward, he started working in the equine field at Hagyard-Davidson-McGee in Lexington, Ky., and then with Dr. Jim Coffman (former K-State provost and veterinary professor) who had a veterinary practice in Wichita in the 1960s.

“Dr. Umphenour is one of a number of K-State veterinary alums who have risen to the top of the equine practice ladder,” Dr. Coffman said. “Overseeing the shipping of hundreds of millions of dollars worth of horses around the world is an example of how far Dr. Umphenour’s work extends.”

As a member of AAEP, Dr. Umphenour has served on several committees since 1984. He is also a member of the Kentucky Veterinary Medical Association, Kentucky Association of Equine Practitioners and the Society for Theriogenology. For the latter association, he served on the board of directors from 1985 to 1988.

Dr. Umphenour joined Hanover (Pa.) Shoe Farms where he was responsible for foaling 450 mares each season and sales prepping 270 yearlings. He worked with 17 stallions in all, which included some of harness racing’s greatest competitors, such as Hoot Mon, Star’s Pride, Ayres, Speedy Rodney and Tar Heel.

After that he went into in practice with Dr. Dewitt Owens in Franklin, Tenn. Their practice involved walking horses, gaited horses, quarter horses and thoroughbreds. Dr. Umphenour started a private practice in Colts Neck, N.J., where he catered to race track/farms, hunter/jumpers and pony clubbers. In 1981, he went to Gainesway Farm, Lexington, working for John R. Gaines, founder of the Breeders Cup and owner of 50 stallions including Blushing Groom, In Reality, Riverman, Lyphard, Arts and Letters, Key to the Mint, Stage Door Johnny, Stop the Music, Unbridled, Broad Brush and Cozzene.

In 1997, he became the resident veterinarian at Ashford Stud. Their stallions include: Storm Bird, El Gran Senor, Woodman, Cigar, Thunder Gulch, Grand Slam, Tail of the Cat and Giants Causeway.

Dr. Umphenour’s wife is Roxanne, and he has four children: Melissa, Stefanie, Paul and Taylor.