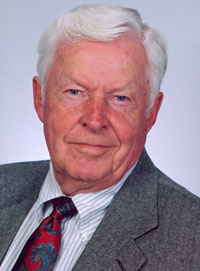 Dr. Dale K. Sorensen, Shoreview, Minn., has been selected to receive a 2005 Alumni Recognition Award on behalf of the Kansas State University College of Veterinary Medicine and its Veterinary Medical Alumni Association. The award is in recognition for time and effort devoted to advancing veterinary medicine and for being an exemplary role model for future alumni.

Dr. Sorensen has had a long and distinguished career as a professor and specialist in large animal infectious disease. He earned his Doctor of Veterinary Medicine degree from K-State in 1946 while serving as a private first class in the U.S. Army. He then attended the University of Wisconsin where he earned a master’s degree in 1950 and a Ph.D. in 1953 in microbiology with a minor in pathology. In 1953, Dr. Sorensen embarked on a 34-year career at the University of Minnesota College of Veterinary Medicine. He became a full professor in 1959 and held several department head positions. He became the acting dean in 1972 and later assumed the role of associate dean for academic affairs and research from 1980 to 1987.

Dr. Sorensen also served as a consultant on many research projects around the world. From 1946 to 1947, he was a veterinary consultant for the United Nations Relief and Rehabilitation Administration where he supervised the animal health programs of horses and cattle being shipped to Europe. He has been principal investigator, or co-principal investigator, in research projects on bovine leukemia, murine leukemia, hog cholera, bovine viral diarrhea, polioencephalomalacia and coliform enteritis of pigs. Sorensen also conducted investigations on large animal disease problems throughout the state of Minnesota.

In the 1960s, Dr. Sorensen was a member of veterinary medical teams that evaluated the state of veterinary medical education and service in the Philippines, Denmark and Malaysia. During a three month leave in 1977, he was a consultant to a large private swine operation in Taiwan where the entire swine production program was analyzed and new programs were initiated. Dr. Sorensen took on more overseas work as a member of a delegation to Cuba in 1979 that explored the possibilities of scholarly exchange between the University of Minnesota and the institutions of higher education in Cuba.

Dr. Howard Erickson, professor of anatomy and physiology at the K-State College of Veterinary Medicine, says Dr. Sorensen has been a leader in many areas of his life. “Dr. Sorensen has been one of the pillars of the veterinary profession for many years, particularly in academic veterinary medicine. He has also been very active in his community,” Dr. Erickson said.

Dr. Sorensen had support from many different people throughout his career in veterinary medicine. “I owe my success to numbers of faculty at K-State and the University of Wisconsin. A few that played a large role were Dr. Edwin Frick and Dr. Lee Roderick at K-State, and Dr. Carl Brandley (KSU ’23) at the University of Wisconsin,” Dr. Sorensen said.

He was born and raised on a farm in rural Centuria, Wisc. Dr. Sorensen and wife of 57 years, Betty, enjoy spending time with their three children and seven grandchildren and playing golf.