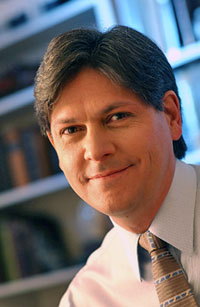 Dr. Mark P. Nasisse, Oak Ridge, N.C., has been selected by the Kansas State University College of Veterinary Medicine and its Veterinary Medical Alumni Association to receive a 2008 Alumni Recognition Award. The award is in recognition for time and effort devoted to advancing veterinary medicine and for being an exemplary role model for future alumni in a professional and community setting.

The award will be presented at the annual North American Veterinary Conference Medical Association in Orlando, Fla., on January 20. Dean Ralph Richardson will present the award on behalf of the K-State Veterinary Medical Alumni Association.

“Dr. Nasisse has admirably served this profession as an educator, researcher and practicing specialist,” Dean Richardson said. “He has provided leadership and support at a national level, which continues to this day. His successes are emblematic to the standard of excellence to which we endeavor in the K-State College of Veterinary Medicine.”

Dr. Nasisse earned a bachelor’s degree in 1976 and a DVM in 1978, both at K-State. He went into small animal practice in St. Augustine, Fla., for two years and then completed an ophthalmology residency at the University of Tennessee, Knoxville, in 1983.

Dr. Nasisse was an assistant professor at the University of Tennessee for a year and then joined the faculty at North Carolina State University. He served as an assistant professor and associate professor until 1994. Dr. Nasisse was selected as the Kraeuchi Endowed Professor at the University of Missouri in 1995. He has published more than 70 articles in refereed journals and more than 25 book chapters and review articles, as well as more than 55 abstracts, book reviews and articles in non-refereed journals.

Dr. Nasisse won the Norden Distinguished Teacher award in 1983 and 1993; Outstanding Teacher for the NCSU classes of 1987 and 1989; Merck Agvet Award for Teaching Creativity in 1993 and the Omega Tau Sigma Gamma Award for Distinguished Service to the Veterinary Profession in 1991.

Dr. Nasisse and his wife, Karen, have two children: Andria and Matt.