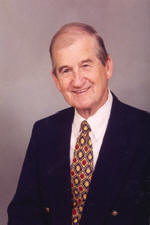 Dr. Lawrence G. Morehouse, professor emeritus of veterinary pathology and retired director of the veterinary medical diagnostic laboratory at the University of Missouri-Columbia, may now be a tiger, but the wildcats still claim him. Dr. Morehouse will be honored with a 2004 Alumni Recognition Award from the Kansas State University College of Veterinary Medicine and its Veterinary Medical Alumni Association. The award will be presented during the K-State Alumni Reception held in conjunction with the Central Veterinary Conference Saturday, August 28, at the Downtown Marriot in Kansas City, Mo.

Lawrence Morehouse was born on a farm near the town of Manchester, Kan., on July 21, 1925. He claims to be “one of a vanishing breed that can claim elementary education in a one room country school house.” Regardless of the structure, the Harvey District 38 “prepared me well for what was to come,” Dr. Morehouse said.

Dr. Morehouse graduated from Abilene High School in 1943 and served as a hospital corpsman/pharmacist’s mate during and following WWII. He enrolled at K-State in the fall of 1946 and received his BS and DVM degrees in 1952 when he was also commissioned in the U.S. Army Reserve until 1957.

After his graduation from K-State in 1952, Dr. Morehouse practiced for a short time in Des Peres, Mo., before continuing his education at Purdue University in West Lafayette, Ind. He receivEd a master of science in pathology and a PhD in pathology in 1956 and 1960 respectively, while serving as director of USDA’s brucellosis laboratory. It was during this time that Dr. Morehouse met his wife Georgia Lewis. The couple married in Lafayette, Ind., on October 6, 1956. They were both Purdue graduates and worked together in a diagnostic laboratory at Purdue. Georgia worked as a microbiologist at the National Animal Disease Laboratory and later as a research associate in the dairy department at the University of Missouri-Columbia.

From 1960 to 1964, Dr. Morehouse served as discipline leader of pathology and toxicology in USDA’s Animal Health Division at the National Animal Disease Laboratory in Ames, Iowa. In 1964 he accepted a position as a professor of veterinary pathology and chairman of the department of veterinary pathology at the University of Missouri-Columbia. In 1968 he became the organizing director of the Veterinary Medical Diagnostic Laboratory and served in this capacity until he was named professor emeritus in 1987.

During his career, Dr. Morehouse has been a senior author or co-author of more than 100 scientific publications and abstracts dealing with infectious, parasitic and toxicologic diseases of livestock, poultry, companion animals and laboratory animals. As an individual who has pursued post-doctoral education and continued researching throughout his career, Dr. Morehouse acknowledges both the difference and the importance of the DVM degree. He would recommend, “Get all the general knowledge you can while in veterinary school. Specialization can come later if that is your goal. The DVM is behind your name for life—Society expects you to be knowledgeable across its breadth—even in retirement!”

Dr. Morehouse’s achievements have not gone unrecognized as he has been the recipient of numerous awards and appointments throughout his career. Dr. Morehouse has received the Dean’s Impact Award in 1995, a Distinguished Service Award in 1987, was commended for Outstanding Professional Service in 1977, and was named Chancellor’s Emissary in 1978 and Executive Chair, PhD Pathology Area Degree Program in 1968, all by the University of Missouri. In 1988 at the Issuance of Resolution #1071 of the Missouri House of Representatives, 84th General Assembly in its second session at Jefferson City, Mo., Dr. Morehouse was honored, “in recognition of his skills and talents in a wide variety of academic experiences, for his positive influence on the lives of students and veterinarians over the years, and for bringing the veterinary medical diagnostic laboratory to the status of full accreditation.” The American Association of Veterinary Laboratory Diagnosticians bestowed their highest honor, the E.P. Pope Award, upon Dr. Morehouse for outstanding service to diagnostic laboratory medicine.

Dr. Morehouse’s knowledge has also been well utilized by a variety of organizations through special appointments and consulting. He has been named as a consultant to the Surgeon General of the United States in Research and Development, named a member of the United States Army Medical Research and Development Advisory Committee, named to the review panel for the Institute of Biological Sciences, National Academy of Science and The U.S. Army Medical Research and Development Command. The Cooperative States Research Service—U.S. Department of Agriculture named him a member of the Animal Health Special Research Grant Peer Panel. He is an elected member of the following honorary societies: Gamma Sigma Delta (agriculture); Phi Zeta (veterinary medicine); Royal Society of Health, London; and Sigma Xi (research). He has received three Certificates of Merit from the U.S. Department of Agriculture: for outstanding training of state and federal veterinarians in the diagnosis of animal diseases in 1964; for organizing, performing and conducting outstanding technical training programs for eradication of hog cholera in 1963; and for performing substantially exceeding requirements of his position in 1959.

Georgia and Dr. Morehouse have traveled abroad a great deal in retirement—some of it for work with an international organization and some for pleasure. In addition to traveling, the couple enjoy boating and sailing at their little place at the Lake of the Ozarks. Dr. Morehouse also claims to be quite the genealogy buff, and is spending his current time writing a family book for the coming generations—greatest thrills have been identifying Revolutionary War ancestors and finding a great, great, great grandmother with a Mayflower number enabling a trace back over the generations to the pilgrims. Georgia and Dr. Morehouse have two children, a son, Timothy Lawrence and a daughter, Glenn Morehouse Olson. Glenn is married to Joel Olsen and is a teacher at the St. Francis, Minnesota High School, and Timothy is an Episcopalian Priest in New York City. Glenn and Joel have three daughters Zoey, age 10, Abilene, age 7, and Jolie, age 5. Tim was married this last fall to Kara Mansfield of Pennsylvania.

Some of Dr. Morehouse’s fond memories of K-State include life at the “Bear’s Nest” across from the Alpha Gamma Rho or AGR house with classmates Joe Curry, Jack “Happy Jack” Adams, and Dennis Goetsch. Basketball games are also remembered: “when you can remember sitting in the rafters of Nichols gym, you can’t lie about your age” Dr. Morehouse admitted. He has even preserved his freshman purple pepster’s cap which has on occasion been worn to Missouri versus K-State sporting events, and has apparently not been appreciated by the Missouri home crowd.

Dr. Morehouse may have ventured out to share his expertise, but he never forgot his fellow wildcats. In his 1998 class updates, he remarked, “The Class of ’52 was special. Some of you, I’ve been privileged to work with over the years, but all of you have always been remembered. Four years together forges a bond not easily broken or forgotten.” Dr. Morehouse is being honored with a K-State College of Veterinary Medicine Alumni Recognition Award not only for his professional achievement but for a lifetime of service, humility and that undeniable Wildcat Spirit.