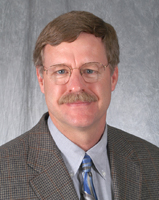 The award is in recognition of Dr. McElwain’s time and effort devoted to veterinary medicine and for being an exemplary role model. The award will be presented to Dr. McElwain at the K-State Alumni Reception at the Western Veterinary Conference in Las Vegas, Nev., February 20.

Dr. McElwain has had a distinguished career as a veterinary pathologist for over 20 years.

He graduated from K-State with a bachelor's degree in animal science in 1978 and his doctorate of veterinary medicine in 1980. While at K-State, Dr. McElwain said pathology classes helped him decide what direction his veterinary career would take. "I have the career that I do because K-State offered a great pathology program," he said.

After graduating from K-State, Dr. McElwain worked in the Crestview Animal Clinic in New London, Penn. He worked mainly with small family dairies of the Amish and Mennonite populations. After a year, he saw that small, family-owned dairies were being replaced by bigger cooperate operations, and decided to pursue specialty training and a research degree.

Dr. McElwain received his Ph.D. from Washington State University in 1986 and became a faculty member at the University of Florida. There, he worked in research and as a consultant for the United States Agency for International Development (USAID) in Zimbabwe, Mali and Kenya.

In 1989, he returned to Washington State where he continues to teach today. He is a professor of pathology in the Department of Veterinary Microbiology and Pathology. Dr. McElwain is also the executive director of the Washington Animal Disease Diagnostic Laboratory, a state and regional diagnostic facility for animal and zoonotic diseases.

He is a member and past president of the American Association of Veterinary Laboratory Diagnosticians (AAVLD), an organization he became involved with while at Washington State. In 2003, he received the E.P. Pope Memorial Award for his dedication to diagnostic medicine and service to AAVLD. Dr. McElwain is also a member of the World Association of Veterinary Laboratory Diagnosticians and is a diplomate of the American College of Veterinary Pathologists.

Dr. McElwain also serves as the AAVLD's liaison for the Centers for Disease Control and was an external advisor for the CDC's Emerging Infections Plan in 2003.

Throughout his career, Dr. McElwain has co-authored and published over 100 works ranging from research he has been involved with to guest chapters for texts and other books. He is a co-inventor of 12 patents and licensing agreements for techniques used for the development of diagnostic assays and vaccines.